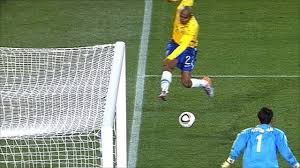 I think a suitable amount of time has passed for me to take stock of the football festival we had in South Africa this summer. Apologies for taking so long with it, but truth be told, I'd gotten pretty sick of the sight of the game afer 11 months of non-stop football. But here it is - the World Cup round-up, where you will find my ratings of the England team, the tournament's best XI, and directly below, the competition's highlights and lowlights:

Not just for giving us the World Cup's opening goal, but for what it represented. Embodied in the electric left-foot strike that arched into the top corner of Oscar Perez's goal, was the pure joy that comes from a goal. It is the most precious currency in sport, and when you add the expectations of the home crowd, the intense glare of the watching world, the desire of all non-Mexicans to see South Africa succeed against the odds, as well as the sheer quality of the strike, and you have a moment to cherish. As the Bafana Bafana celebrated wildly I said that Tshabalala will never achieve a moment like that in his career. And after watching him try to catch lightning in a bottle for a second time against France in the last group match, that seems to be the case. But he'll never forget the moment he enraptured 50 million South Africans, AND millions more worldwide. I certainly won't.

One of the things that World Cups are remembered for are great goals. We didn't have too many this summer, but in their first group match against DPR Korea, Brazilian right-back Maicon provided a lightning bolt of a strike that had me out of my seat at work. It was a goal that would have graced any of the great Brazilian sides of the past. Undoubtedly the best goal of the tournament, a moment of inspiration both in its conception and execution. And it's the promise of such demonstrations of quality that got me loving sport in the first place.

While not at their best, the Spaniards deserve credit not only for playing enterprising football, but for belying the ridiculous theory that flair cannot be teemed with steel. Xabi Alonso AND Sergio Busquets were a strong shield in front of a back four that contains arguably the best centre-half in the world in Gerard Pique and one of the few goalkeepers who can be called world-class in Iker Casillas. And any side that can stand up to Holland's cowardly tactics in the final, and still come out victorious deserves a ton of credit. Worthy world champions.

The game of the competition. A gripping see-saw affair between two closely matched teams with a superb goal scored from each side. Either Uruguay were heading for their best performance in a World Cup since the legendary side of 1950, or Ghana would go further than an African nation had ever done before. And with the entire African continent on their side, Asamoah Gyan had a last minute penalty to send the Ghanians through to the semi-finals. Gyan, who had a wonderful competition and had already scored twice from the spot, failed to do so on a third occasion as his effort hit the crossbar and went over. As the match went to a penalty shoot-out seconds later, Gyan picked the ball up, marched to the centre circle and fired home Ghana's first spot-kick. But two of his teammates couldn't follow suit. Uruguay's collective nerve was stronger and it was they who took their place in the semi-finals. Gyan was left in tears and it summed up every African fan of the game. But somehow it gave the story a thread of tragedy which only made it all the more compelling. And stop the bellyaching over Luis Suarez's handball. He transgressed, and was correctly sent-off. The punishment fit the crime - the same as deliberately fouling a player who's clean through on goal - if you want to apportion blame to anyone, then hold Gyan accountable for not holding his nerve when he needed to.

Yes, I liked them. And you know what, I wasn't the only one. The way people complained you would have thought that the noise emitted from them was being piped into the grounds. Well no, fans were perfectly willing to part with their money to purchase and then blow them (stop sniggering) while watching the matches. No-one was forced, no-one had a gun held to their head. These fans - who by the way, paid to go out to South Africa, so if anything were more worthy of enjoying the games than those who chose to watch the action on television - were exercising their right in participation. So maybe you didn't like them, but the thousands in the stadiums seemed to have no problem, so turn your TV down and stop complaining.

One of the cliches approaching the World Cup was that you'd need your head examined to fly out to South Africa during the tournament. If reports were to be believed, South Africa was a haven of criminality where AIDS was lurking around every corner waiting to infect any white Westerner who earns more than £30,000 a year. The security was meant to be leakier than a colander, just ripe for a terrorist attack. Well there were no major incidents, matches passed off with the focus squarely on what happened on the pitch. Fans travelled the country without being held up at gunpoint, and in what was a very pleasing sight, supporters mixed freely, regardless of their national allegiance. The hooligans were kept out, with South Africa making sure that a heavy police presence were an effective deterrent to any undesirables, and the matches were allowed to be played out in peace.

Sadly, other elements of FIFA's handling of the tournament left a lot to be desired. Many volunteers who worked in and around the grounds were not even paid a fraction of what was agreed. FIFA passed the buck and local police forces were called in to ensure that order ensued at the tournament's stadiums. As well as that, while the World Cup is football's richest prize, it's FIFA's excuse to put a pound, dollar or euro sign on anything that they can. Unsurprising but still shameless, FIFA not only bombard us with advertising but also forbid local traders from profiteering in any way. For 5 weeks, South Africa became FIFA-land, and any merchandise that didn't have 'Official' in the title ran the risk of severe sanctions, with the threat of arrest and/or legal action for those who didn't comply. What a lovely way to spread the gospel of what is ostensibly the world's most inclusive game.

Many said that Sepp Blatter's obstinate refusal to countenance the use of additional technology when adjudicating decisions would cost a team dear during the World Cup. And sure enough, on the competition's third Saturday, both Mexico and England fell foul of shockingly bad officiating. So now that costly mistakes were made under the glare of the watching world can Blatter and his cronies pull their collective heads out of their rear ends, investigate a way to best help referees with video technology and then implement it.

For making this year's World Cup final one of the worst of all time. This was a more functional Dutch side that we had seen in recent years, but they played well within the rules until they came up against Spain in Johannesburg. After an opening 15 minutes in which the Spaniards were dominant, Holland took it upon themselves to try and kick the Iberians into submission. To set out to injure a peer is reprehensible and is worthy of the behaviour you see in city centres at 1am on a weekend. They disgraced the name of Dutch football and disgraced the sport in which they make their living. Every single player in orange who indulged in such bullying tactics in the World Cup final should eternally hang their heads in shame. I hope that their actions haunt them for the rest of their careers. No, in fact, the rest of their lives.

Ghana are obviously exempt from this, and South Africa deserve credit for going down in a blaze of glory. But on the whole, the African countries were insipid. Nigeria AND Cameroon were appalling, summed up by Yakubu Aiyegbeni's miss of the tournament against South Korea. And it seems incredulous now that some (with solid reason) had tipped the Ivory Coast for success this summer. But shorn through injury of their talisman, Didier Drogba, they were negative, fearful and at times sickeningly vicious towards their opposition. Their attempts to injure and antagonise the Brazilian players after being played off the pitch by the Selecao was distasteful in the extreme. The horror tackle perpetrated by Kader Keita on Elano was the worst I saw in the whole competition and could have ended the Fernabache midfielder's career. This could have been a showcase for African football. Instead it showcased just how far behind the elite - in terms of ability and heart - they actually are.

World Cups are where legends are made. It's very rare that you can go down as one of the game's greats without impressing at one. And yet all the names that we were told to watch, who are endorsed by all the major sporting goods giants failed to sparkle. The triumvirate of Lionel Messi, Cristiano Ronaldo and Kaka left their A-games back in Barcelona and Madrid. This will be incredibly frustrating to them as well as us, as they know that their individual desires to be placed amongst the upper echelon of footballers cannot be achieved solely in the realm of club success. The window to greatness does not stay open for long and while they should all get another chance to impress in Brazil in 2014, it would be a pity to see such talent failing to bloom on the sport's most watched plinth.


Don't forget to download 'The Greatest Events in Sporting History' Available at http://sportsevents.libsyn.com/, e-mail us at sportshistoryshow@googlemail.com and you can follow us on Twitter @TGEISH
Posted by Shane at 20:24