Manchester United 1; Manchester City 6. Such an astonishing scoreline that there's no other way to begin this post. It was the long awaited clash of the top two in the Premier League; the established empire, in champions Manchester United against the nouveau riche upstarts, Manchester City - given the moniker of "noisy neighbours" by United manager Sir Alex Ferguson. They have been the sides that have looked the class in English football's top division, and have caused some to dub Manchester as England's new "capital of football".

United started the match as narrow favourites, and played as such in the early stages, dominating possession. Ashley Young looked especially threatening, and City needed all their defensive nous to keep the score at 0-0. Then came the first of three key moments, which determined the final outcome. 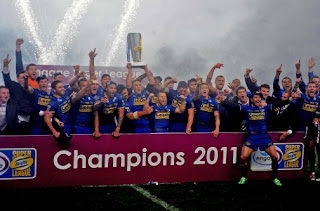 By Jonathan Wilkinson
Last week Leeds Rhinos cemented their place in history, not only as the first team to win the Grand Final from outside of the top two, but they also recorded their fifth title in only eight years. Let's look at the win on Saturday, a win that seemed impossible at the mid-point of the season when Leeds were struggling to keep a place in the top eight.
Read more »
Posted by Unknown at 19:36 No comments:

Beijing's Bird's Nest Stadium was left dumbstruck by Usain Bolt's feats during the Olympics of 2008. Which makes it a pretty easy topic for our latest episode. I'm joined by Will Tristram (I won't list the podcasts he's on as there are far too many to mention) as we talk about how Bolt came out of China as arguably sport's biggest superstar of the current era.

The Greatest Events In Sporting History' is available from http://www.simplysyndicated.com/shows/sportinghistory/

So far, all of the teams in the Scottish Premier League have now played 10 matches (with the exception of Celtic and Dunfermline). Also, with the first stages of European football completed and the League Cup at the quarter-final stage, it is a good time to see if teams are matching their pre-season expectations:

English Football's Laughing Cavaliers, But For How Long

Manchester United: Premier League champions, more league titles than any other English side, kings of all their survey, arguably the greatest manager of all time in Sir Alex Ferguson at the helm, unbeaten so far this season. They are the division's top scorers, playing some of the most exhilarating stuff in the land. The sheer joy of their play has turned them into the game's laughing cavaliers.