Well it was never going to be dull, was it? An unforgettable night in Catalunya ended with Chelsea upsetting the odds and knocking Barcelona out of the Champions League. An incredible rearguard frustrated the holders and ensured that a tough week for Barca had a miserable denouement.

We started this series with a look at Jessica Ennis; an instantly likeable girl-next-door. But another one of Britain's potential stars of the Olympics is the cyclist, Mark Cavendish.

Win The Title? Then Copy The Arsenal Team... No, Not That One! 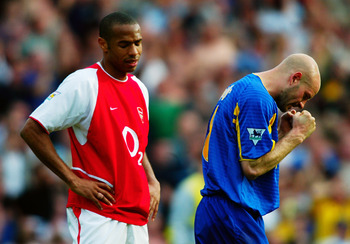 
There's a degree of irony in the Emirates Stadium possibly being the deciding factor in Manchester City's faltering title challenge, as the fortunes of Arsenal and City have been somewhat intertwined since 2008. Not only has there been a periodic stream of players leaving North London for Manchester, but ever since Sheikh Mansour bought the club, City has been on the receiving end of supercilious sentiments from other clubs, unhappy with the new found riches at their disposal. Arsenal manager Arsene Wenger has been one to brand the opulent spending teams like City and Chelsea as "financial doping". Whether you believe this is true or not (which may depend on who you support), what is clear is that Arsenal's status as a regular challenger for the English league title has diminished as City and Chelsea's have increased.