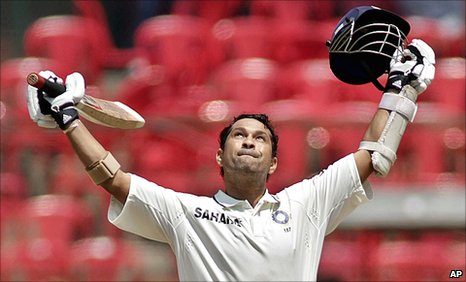 It's a pity that many have turned their eyes away from the world of cricket since the Pakistan spot-fixing scandal earlier in the summer. While it's understandable how the overlong & controversial series between England and Pakistan would lead some to want to switch off from the game - especially with the Ashes imminent - it meant that people turned their backs on some of the best sport of 2010 so far.


Because England's opponents this winter, Australia, have just been involved in an enthralling two match series against India. Australia's captain, Ricky Ponting had yet to win a Test Match in India as captain. And after the past month, Ponting is still yet to win a Test, with India winning the series 2-0, and retaining their ranking as the world's No.1 Test team.

But don't think for a moment that it was a comprehensive victory. The first Test ended in a nail-biting one wicket victory for India, with VVS Laxman hitting an unbeaten 73 (despite being unable to run).

The second Test began five days later, with the occasion being grabbed by the world's leading batsman, Sachin Tendulkar.

Journalist Brian Glanville has stated that it takes a great deal of character to rise to the occasion when the eyes of all who are watching are expecting you to do just that. 'The Little Master' arrived in Bangalore on the brink of becoming the first man to score 14,000 Test Match runs. In front of his adoring public, Tendulkar not only reached the milestone but scored a double century (214) in the first innings to set India on their way to a comfortable seven wicket victory. Not content with piling on the runs in the first innings, he also scored an unbeaten 53 - dishing out some fearful punishment to Australian spinner Nathan Hauritz in the process - in the second.

There are a number of things that make Tendulkar a sporting legend. As well as the statistics I've already mentioned, he has more centuries in Test Match & One-Day cricket than any other player, he's the first man to score a double hundred in the 50 over version of the game. He's also been honoured with Padma Vibhushan award - India's second highest award for civilians.

I'm going to have to stop there otherwise this post will become a list. You also have to remember that in India, cricket is the national sport. Like football in England, or baseball in America, India's cricketers perform under intense scrutiny. It's players are treated as heroes when they succeed on the cricket field and lambasted when they fail.

And if that wasn't enough, Tendulkar is now in his 21st season as an international cricketer. He made his debut aged only 16. He is now 37 and yet shows no signs of slowing up in his levels of commitment and performance. Despite all the media attention surrounding the man, the constant pressure every time he walks out to bat and the fact that he is feted in India like a king, it seems to affect Tendulkar not a jot. He has had to deal with the scrutiny since he was a teenager. How has he been so successful for so long under such circumstances?

While being interviewed after India's victory in the 2nd Test, Tendulkar was asked this very question. He simply shrugged and replied, "Other people can talk about the records. I'll just get on with the business of scoring runs".

An answer of such clarity that it cut through the excessive B.S that surrounds sport these days. Yes, Tendulkar is a sporting celebrity and he has plenty of endorsements, but his professional approach is a throwback to the amateur era of sport. All he concerns himself with is being great. His inherent gifts may have made him wealthy and famous, but that's not his endgame. 'The Little Master' seeks excellence, not riches. Tendulkar is true cricketing legend and we should all cherish the fact that we are around to see him play.


- FIFA President Sepp Blatter visited 10 Downing Street this week regarding England's bid to host the 2018 World Cup. In a press conference with Prime Minister David Cameron, Blatter espoused England's suitability as World Cup hosts. Now while there was a bit of grandstanding on the part of Blatter, he is correct that if the World Cup began tomorrow, England would be in a perfect position to organise the event.

The problem is that the 2018 World Cup doesn't start tomorrow. We've still got another eight years to go. And Russian Prime Minister Vladimir Putin is pulling out all the stops to ensure that Russia get to be the competition's hosts rather than England. In trying to focus on how a World Cup could help bring 'East and West' together, showing the new face of Russia to the world, Putin is appealing to Blatter's ego and sense of self-importance. While in terms of organisation, finances, facilities and security, England would tick every box required from a World Cup host. But Blatter has an eye on winning a Nobel Peace Prize and has an absurd notion that football can bring the world closer together.

So while the award of hosting the 2018 World Cup should be a no-brainer, it's worrying that the head of football's governing body is completely brainless.


- In midweek, the Euro 2012 qualifying match between Italy and Serbia was called off after only six minutes due to crowd trouble amongst the Serbian fans. There had been unpleasantness outside the ground with the Serbian coach being attacked, by their own fans.

It transpired that people masquerading as football fans were using the occasion for their own political ends. Offensive chanting could be heard, numerous Kosovan flags were burnt in the crowd and flares were thrown onto the pitch, precipitating the match's cancellation.

Now this is not a political blog so I would not claim to pass judgements on these people's motives. But I will pass judgement on their actions. This was a game of football. A game. Something that exists for people's enjoyment. And it was ruined by around 300 hooligans using the profile of an international football match for their own agendas. I feel sorry for both the Italy and genuine Serbia fans who not only spent money to attend the game, but had a wretched experience that you cannot put a price on. There could easily have been young children attending their first ever football match, and etched onto their minds forever will be the sight of ...well I refuse to call them people, the sight of animals setting out to cause as much chaos as they could, in and around the stadium.

This behaviour is unacceptable and should not be tolerated under any circumstances. If the Serbian FA are unable to regulate people who cause mayhem under the guise of supporting their national team, then they should not be allowed to play international games. It is vital that UEFA take severe punitive measures against them to prevent this kind of thing occurring again.


Don't forget to download 'The Greatest Events in Sporting History'. Available at http://sportsevents.libsyn.com/ or at www.simplysyndicated.com, e-mail us at sportshistoryshow@googlemail.com and you can follow us on Twitter @TGEISH
Posted by Unknown at 22:06