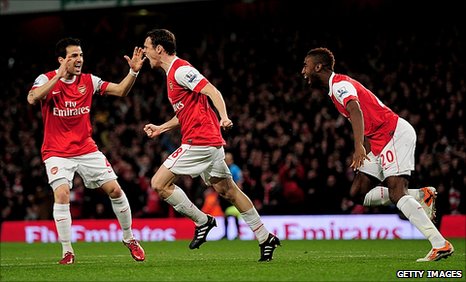 Arsenal moved to within a point of Manchester United at the top of the Premier League table after overcoming Stoke in a spiteful encounter at The Emirates. But the victory could come at a heavy cost for the Gunners.
Already having to start the match without Robin Van Persie and Laurent Koscielny due to injury, both Cesc Fabregas and Theo Walcott also left the pitch with ailments that are due to keep them out of not only the upcoming Carling Cup final, but a crucial chunk of games that could define Arsenal's season in the next few weeks.

These injuries meant that players such as Nicklas Bendtner, Sebastian Squillaci and Andrey Arshavin had key roles to play in the victory. Featuring mainly in cup competitions rather than league games had led many Gooners to dub these players as part of Arsenal's "B Team".

It was a night where many of the ostensible weaker links in Arsenal's chain came to the fore, which was just as well, as most of the side's better players like Samir Nasri and Johan Djourou were below par.

After a breakneck opening spell when Walcott had two chances to score - hitting the post with one, firing wide with another - Arsenal took the lead with Squillaci nodding in after Bendtner put a Jack Wilshere corner back into the six yard box. However, Fabregas then suffered a hamstring strain and he was soon replaced by Arshavin.

As Arsenal's captain went down the tunnel, so did the team's early momentum. Their passing in the final third constantly failed to function efficiently with Stoke keeper Asmir Begovic only needing to make a routine save from Arshavin until half-time. However, they did manage to carry out Arsene Wenger's pre-match instruction to keep hold of the ball to ward off Stoke's physical and aerial threat, and progressed to the interval without incident.

Stoke had been moribund in the first-half, and as expected, came out for the second period with a much increased sense of purpose. They pressed Arsenal from the front, making it difficult for the Gunners to get out of their half. With refereeing assistance from a seemingly myopic Peter Walton, Stoke carpet-bombed Arsenal's penalty area with set-pieces and Rory Delap's long throw-ins any chance they got. Ryan Shawcross - who got a predictable volley of abuse from the home fans whenever he touched the ball - almost equalised after his header was diverted wide by Djourou, Robert Huth headed over after Wojech Szczesny failed to punch clear a Delap throw-in and Jermaine Pennant rippled the side of the net with a free-kick in the final moments.

While Stoke's lively response was expected and deserves credit, what was also expected and deserves no credit was the darker side of their game. John Carew on Djourou, Marc Wilson on Arshavin, Dean Whitehead ploughing through both Bacary Sagna and the challenge that put Walcott out of the Carling Cup final, Stoke's tackles on occasion left a lot to be desired. It would be unfair not to mention a poor tackle by the otherwise excellent Gael Clichy on Pennant that brought a deserved yellow card.

Tensions had simmered between the two sets of fans throughout the first-half, but the more robust nature of the second-half turned the stands into a cesspit of hate. As well as the vicious bile directed at Shawcross, the Arsenal song sheet included, "F****** pikeys! Get a proper house!" and "We pay your benefits!". They then erupted when the Stoke fans responded to Walcott being stretchered off with catcalls and hoots of derision. The Emirates Stadium echoed with roughly 55,000 people bellowing to the away section, "You're scum, and you know you are!!"

Don't mistake this for thinking that the ground was a cauldron of noise. This was one of the quietest matches I have known at the stadium. It's sad that the only time the home support seemed to find their voice was when they engaged in name-calling with the Stoke fans. I have never been to a North London derby before but I doubt that the outright hate between Tottenham and Arsenal would surpass what I saw in N5 last night.

But regardless, Arsenal deserve a lot of credit for coming out of the game with all three points. According to pundits who rely on cliches rather than analysis, Stoke are the kind of opponents that Arsenal come unstuck against (despite their 100% home record against them). They have huge games coming up in the next few weeks - starting at Wembley on Sunday - and could have easily taken their eye off the ball. The fact that they managed to extract maximum points without playing anywhere near their best shows that this squad may have what it takes to push Manchester United to the limit in the title race.

And with their recent injuries, the whole squad could be needed as the assault on four trophies goes on.


Don't forget to download 'The Greatest Events in Sporting History' from www.simplysyndicated.com, e-mail us at sportshistoryshow@googlemail.com and you can follow us on Twitter @TGEISH
Posted by Shane at 02:14