Too Many Clasicos? How Can You Have Too Much Of This? 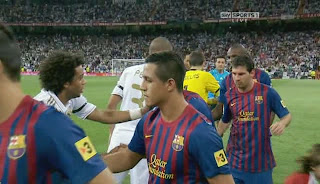 When Real Madrid and Barcelona were set to play in the quarter-finals of the Copa Del Rey, the howls of lament could be heard from fans and pundits; "Too many clasicos!", "I'm sick of seeing Real & Barca all the time!", "What's next, are they going to play each other every week!?"


What left me nonplussed is that the complaints implied that these Real/Barcelona contest has been arranged in advance, like a WWE storyline. I don't see how either club is able to prevent themselves being drawn together in a cup competition, it's pure happenstance. What were the organisers meant to do? Redraw the whole competition to deliberately keep them apart?

The reason Barcelona and Real Madrid tend to play each other often is quite simple; they are the best two sides in Spain, and probably the world. Of course they would be scrapping amongst each other to win the sport's major competitions. It's the same reason we saw so many encounters between Martina Navratilova & Chris Evert, Muhammad Ali & Joe Frazier or Ayrton Senna & Alain Prost.

But that's not even the point. Who cares why there are so many recent clasicos? Surely we should simply rejoice that there are. Last week's 2nd leg in the Camp Nou was an enthralling contest, Real looking down and out at half-time, before coming back to draw 2-2, falling narrowly short of knocking the Spanish champions out. Sometimes you can never have too much of a good thing. Contests between Barcelona and Real Madrid are currently one of sport's great rivalries.

If you're unable to find pleasure in this, then I suggest you stop watching football.


- You've triumphed in one of the greatest matches of all time, where do you go after that? If you're Novak Djokovic, you do it all again.

There's no superlative to ascribe to what Djokovic achieved on Sunday, beating Rafael Nadal in the longest match in Grand Slam history, but what is now apparent is that tennis has an undisputed king. Roger Federer is regarded by many as the greatest player to ever swing a racket. And yet, he was usurped from the game's summit by Nadal, with the Spaniard having an 18-9 win-loss record in tournament finals.

But now Djokovic is proving himself as the better of both the aforementioned legends. Since last year's Australian Open, the Serb has won four out of the last five Grand Slams, beating Nadal in three of them. In their last seven encounters, Nadal has been unable to register a victory.

This is no longer a golden age in tennis, it's the golden age. Rod Laver, Billie Jean King, Martina Navratilova, Bjorn Borg, John McEnroe; their achievements are all being left in the shade by Federer, Nadal and Djokovic (with Andy Murray also looking set to join them).

Sport can fluctuate wildly, but what is happening in men's tennis is accelerated evolution. As Federer was annexed by Nadal, he is suffering the same fate at the hands of Djokovic. And all in the space of only five years. The king is dead. Long live the king.


- Despite what you may think, we love a good news story on this blog. So we doff our proverbial caps to the Leeds Rhinos, who announced that their cheerleaders will be supplemented by two male dancers for the new Super League season.


Personally I've never been the biggest fan of this kind of thing in sport (dancers in general). I think it's one of the increasingly prevalent sideshows that take away from the athletic prowess on the field of play. However, there's no denying that they are very talented at what they do.

But the way cheerleaders are used is an exemplar of a wider societal problem. Even in the ostensibly meritocratic world of sport, men are there to be looked at for their sporting skill. Women are just there to be looked at. But the addition of male dancers can help offset accusation of sexism. Anything that helps bridge the gender divide - proving there is no domain that is just "for women" - has to be applauded.

It's only a little thing that the Rhinos have done, but sometimes that's how equality suffuses itself throughout society. An act of moral decency eventually doesn't become noteworthy, but everyday. Let's hope that this is the starting point for an era where a story like this will no longer be a story, as it'll be too ordinary to warrant a mention.


- However, as far as social progress goes, it seems football remains miles behind rugby league. I'm never a big fan of footballers on Twitter, the worst example of which being Joey Barton. But he deserves nothing but praise for being the only Premier League player to speak publicly on a recent BBC documentary about homosexuality in football.

It's clear that Barton is one of the more insightful players in England, and while that may not be saying much, his sentiments on the programme is one that should be echoed by all. It was in sharp contrast to many of the other revelations in the documentary, the standing of gay men in the sport is comparable to their place in society as far back as the 1950's.

"The Greatest Events in Sporting History" is available to download from www.simplysyndicated.com/shows/sportinghistory/, e-mail us at sportshistoryshow@googlemail.com and you can follow us on Twitter @TGEISH
Posted by Unknown at 01:17