The Olympic Diaries of a Yorkshireman: Part Two 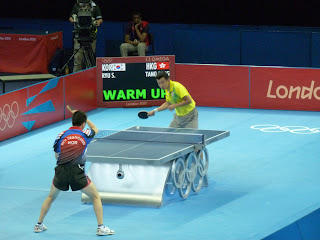 As relevant as always, and over two months after the event, here is part two of my Olympic Diary

Deciding to take full advantage of my free travel on a day of an event, I took myself off to the British Museum. I won't bore you with my experiences there since it has nothing to do with the Olympics so let's fast forward a good few hours.

Tonight was a new venue as I headed to the ExCel centre (see what they did there? Very clever) to take in the table tennis. I got there quite early so managed to take in a meal at a pub that must have being thanking its lucky stars as it was the first pub you came across from the DLR station. While watching the crowds pass by it was clear that there was a difference from the crowd in the Olympic Park the night before. Here the crowd was dominated by Americans and Eastern Europeans, most likely because the wrestling was on and they all seemed to be very knowledgeable about their chosen event. 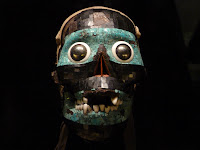 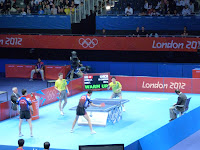 It turns out that Table Tennis is a rather entertaining live sport, ok scrap the rather, it's bloody entertaining. When a rally got going the crowd were enthralled and when the underdog started to edge ahead, the place entered into a frenzy. This experienced proved two things; we British love an underdog no matter what the sport, and people will pretend to be experts in a sport after only watching it for 10 minutes. The match I was watching was the team semi-finals between the South Koreans and Hong Kong, with South Korea being the clear favourites. The first game was an incredibly tense affair, going all the way with the Koreans edging it in the end, but it got the crowd on their feet in support of Hong Kong, chanting during the breaks as if it was Team GB out there. Although it ultimately didn't do them any good as they lost 3-0, with the second game being a walkover but the doubles went the distance and I feel fairly safe saying that the sport won many new fans that night.

Day Three: Yorkshire medals in Hyde Park and outrage at the U.C.(bloody).I

I didn't go to any events today. Instead I headed off to meet up with Shane (my co-host) and Emma (our loyal listener) to watch the day's events on the big screens in Hyde Park. After getting ourselves a prime location where we could see 3 different screens, we watched the action unfold. First up was Yorkshire's own Brownlee brothers, who managed to increase our medal tally and set the mood for a great day. Giving me a taste of yet another atmosphere as thousands of British people waved their flags and cheered on our athletes in a way that really brought home how much we were getting behind the games - remember this is people who are out in force to watch sport on television.

There was one low point of the day, and that was the decision by the judges in the Velodrome to ruin the last great contest between Victoria Pendleton and Anna Meares by harshly disqualifying Pendleton from the first race at which point the fight seemed to leave her. This did not go down well with the crowd, but Chris Hoy came to the rescue by picking up another gold for the British cyclists. Oh, and another low point was the news that some nobody from X-Factor was going to be playing, so we quickly decamped to the pub to enjoy the rest of the evening's offerings.

I think it was this day, more than any other during the Olympics that proved to me how much the British people took to the Games. To be in the middle of a huge crowd, essentially watching television was testament to how much we love sport as a nation, and what a huge role it plays culturally for us. I'm not sure any other event could have brought so many people together in such a way. There was none of the cynicism that accompanied the Jubilee, just the joy of being part of a special moment in our history.


"The Greatest Events in Sporting History" is available to download from http://www.simplysyndicated.com/shows/sportinghistory/, e-mail us at sportshistoryshow@googlemail.com and you can follow us on Twitter @TGEISH
Posted by Shane at 23:26