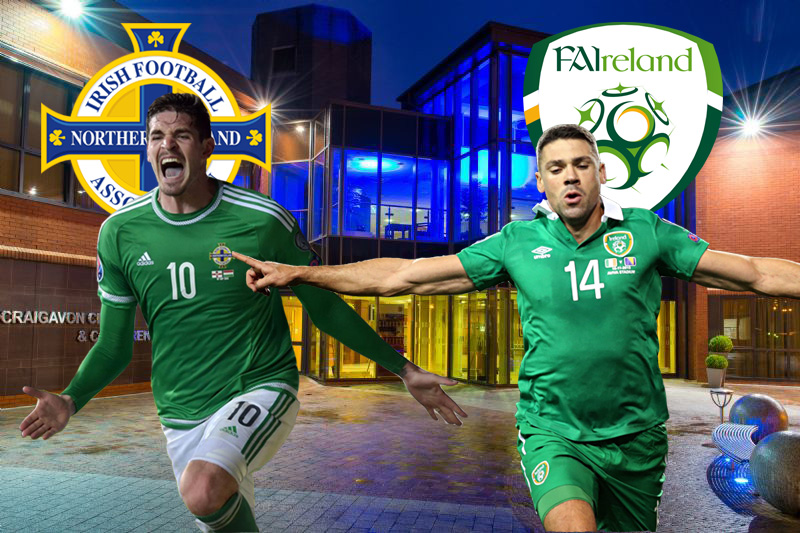 
For the first time this summer, both Northern Ireland and the Republic of Ireland will be playing at the European Championships, making it a fitting time to explore the long-running rivalry between these not-so-friendly neighbours.
Their history mirrors the turbulent nature of Irish politics in the 20th century, not unique in terms of sectarian footballing rivalries. You may know about the Auld Firm. However, the footballing relationship between Northern Ireland and the Republic is altogether more complex.

Seeds of hostility
Football has been played in Ireland since the 1860's. The sport was organized in Belfast by the Irish Football Association (IFA). It had initially been more popular among the Protestant communities of Ulster, but by the 1880's, the sport was increasingly gaining traction further south, and the IFA faced accusations of a continuing Ulster-Protestant bias.
For example, from 1882 to 1921 players from Leinster clubs won just 75 caps for the Irish national team, compared to 798 for Ulster players. Belfast was assigned as the de-facto home of Irish football, hosting 48 international matches during this period, compared to only 6 for Dublin.

Partition
The schism in Irish football aligned with the increasingly fragmented nature of the country. British rule had been immensely unpopular, especially among Ireland’s Catholic population, who saw themselves as a conquered people. The British imperial project was discredited by a long record of misgovernance, neglect and under-representation. Symptomatic of this was the Irish famine of the 1840's, causing the population to shrink by more than 20%.
Unrest had been simmering , and it boiled over during the Easter Rising of 1916, where Nationalists took up arms for independence. The British brutally crushed the rebellion, executing rebel leaders in the process. Ultimately, this ruthless reaction increased sympathy for the Nationalist cause, and British rule in the entirety of Ireland was becoming untenable.
However, many in the North - which had a Protestant majority - remained largely loyal. The Scots-Irish Ulster Protestants identified as British, opposing any notions of independence.
In 1920, the British passed the Government of Ireland Act, which set the framework for the division of Ireland, with semi-autonomous parliaments in the North and South. The move was designed to placate calls for home rule in the majority Catholic South whilst also appeasing Northern Protestants.
This did not dampen Nationalist spirits, however. Fighting followed in the Irish War of Independence, and by 1922 the British finally conceded. They granted total independence to the Irish Free State, with the catch that Northern Ireland was able to opt out and remain in the United Kingdom.
In these tumultuous times, it was inevitable that football would become subject to the split. Southern footballing officials, already smarting from decades of neglect and perceived bias from Belfast, created a new Football Association for the Irish Free State. The Football Association of Ireland (FAI) was born.

Competing claims to football sovereignty
What followed over the next few decades was a tussle for the identity of Irish Football. Both Football Associations claimed to be the sole representative for the entirety of Ireland, and both used the name "Ireland".
The IFA frequently selected players from south of the border to play for their Ireland team. Indeed, there were a total of 38 dual internationals from 1921 to 1950.
The situation became particularly farcical during qualification for the 1950 World Cup, the first tournament that both teams had entered. Four players (Tom Aherne, Reg Ryan, Davy Walsh and Con Martin) played for both the Republic and Northern Ireland during the campaign. All were Southern born, but had been persuaded by the IFA to turn out for the North. The FAI, understandably disgruntled with the situation, started to lobby FIFA for a resolution to the uncertainty.
That resolution came in 1953. FIFA decreed that eligibility would be restricted according to political borders, bringing an end to the dual internationals. Furthermore, in a characteristic compromise, FIFA ruled that neither team could call themselves "Ireland". Rather, they would now be officially referred to as the "Republic of Ireland" and "Northern Ireland".
This arrangement remained largely intact until the Good Friday Agreement of 1998, which allowed Northern Irish nationals to claim citizenship with the Republic, something that has been taken up by many Northern Irish Catholics, such as Daniel Devine, Darron Gibson, Shane Duffy, Marc Wilson, Daniel Kearns, and Paul George.
This has reignited elements of the historical tensions between the two FA's, with the Northern Irish attacking what they perceive as ‘footballing apartheid’.

Attempts at reconciliation
Remarkably, in the 1970's, during the height of The Troubles, there were attempts to reunite the two teams. Many pointed to the fact that rugby union was organized on a all-Ireland basis, and argued that unification could help heal the rifts between two nations.
Reunification had some high profile supporters. George Best was always vocal in his desire to play for a united Ireland team.
Between 1973 and 1980, the two FA's met for a number of meetings to discuss the issue. However, an agreement was never reached. Ultimately, the political fault lines were simply too vast, as Harry Cavan, the IFA president at the time, commented:
“The problem with people who speak glibly of unity in Irish soccer . . . is that they tend to ignore the facts of life here in the North of Ireland. The concept of one Ireland football team may be exciting but, unfortunately, it does not take account of the fact that we are living in troubled times. “

A barmy night in Belfast
With unification now a distant dream, the rivalry continued. One of the most heated clashes between the two teams came in 1993 at Windsor Park, in the final qualification match for the 1994 World Cup.
Jack Charlton’s Republic of Ireland needed to avoid defeat in order to qualify for the tournament. Northern Ireland were already out of the World Cup, but the prospect of thwarting their neighbours was more than enough motivation.
It was given extra spice by events surrounding the match. In the weeks leading up to it, 23 people had been killed by paramilitaries from both sides of the conflict. Players from the Republic arrived in Belfast accompanied by a massive police presence, with fears that sectarian tensions could boil over.
The mood in Windsor Park was feverish. Jack Charlton commented that “I have never seen a more hostile atmosphere." Republic midfielder Alan McLoughlin recalls receiving fervent abuse throughout the match from the stands:
” I could hear it and feel it right behind me. You didn’t dare look around and make eye contact. The venom in their eyes shocked me.”
On the night, Jimmy Quinn’s 73rd minute goal seemed to have sunk the Republic, sending the passionate home support into delirium. However, McLoughlin’s equalizer five minutes later was enough to send the Republic to the World Cup. So ended one of the most heated and hostile football matches ever played on the British Isles.

Improving relations?
Today political tensions remain, and the tribal nature of football often magnifies this. After all, it was only recently that former Northern Irish international Neil Lennon received abuse and death threats from his own fans. Lennon, a Catholic Celtic player who had voiced his desire for a United-Ireland team, could not be accepted by a section of the Northern Irish support.
However, the worst of the Troubles seem a long way away. Most will agree that progress has been made in Northern Ireland through the peace process. Furthermore, Northern Ireland and the Republic of Ireland have met each other in friendly matches since, in a less venomous atmosphere.
A united Ireland team seems unlikely, and the rivalry will continue. Hopefully, a rivalry that can retain its intensity, but also be one of mutual respect and (begrudging) admiration.


"The Greatest Events in Sporting History" is available at https://soundcloud.com/sportshistory and http://www.simplysyndicated.com/shows/sportinghistory/, e-mail us at sportshistoryshow@googlemail.com and you can follow us on Twitter @TGEISH
Posted by Shane at 22:31