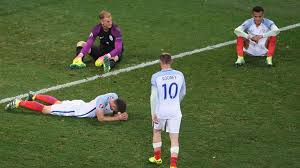 Iceland’s victory over England at Euro 2016 sent shockwaves through the footballing world; the latest episode in a long history of underachievement failure for the England men's national team. The toothless nature of the performance, and the lowly standing of the opponents made this defeat particularly hard to take.
It would be hard to argue with the closing remarks of commentator, Guy Mowbray on the night: “Surely this is as bad as it’s ever been for England?”

With the post-mortem truly underway, let's look at why have England been so underwhelming at the highest level.

Since lifting the World Cup in 1966, England have won just 6 knockout matches in World Cups and European Championships, with the only one of the opponents (Spain) that could be considered a major footballing nation. Even then, that victory came on home soil, in a penalty shoot-out after a 0-0 draw.

This is in stark contrast to England’s European rivals. Germany have won a total of 35 knockout ties since 1966 (and before Euro 2016 began), as well as lifting 6 championships Italy and France have 21 and 16 victories respectively. while Spain have 14.

England’s paltry tally of 6 puts them in the same bracket as the likes of the Czech Republic. The statistics show that England have no claim to being a top footballing nation. For all intents and purposes, they're a second-tier footballing power.

A long running complaint has been that English footballers simply possess inferior skills to their European peers. The English game has always been characterised by a fast-paced, physical nature, with high-quality ball retention and passing often lacking.

There have been few English equivalents of cultured midfielders such as Andrea Pirlo and Andres Iniesta. This has its root in the English style of youth development, where strength and physical presence are often paramount.

This is a view echoed by Brazilian 1970 World Cup winning captain Carlos Alberto: "Technical skills like dribbling, good movement, the ability to pick a pass are key to breaking teams down, but you just don't see it when England play, their style is always the same… They never changed, they never improvised and they never improved. They put the high ball into the area and try to head it in, but they need to focus on more technical skills."

Likewise, tactics are given less weight in England than on the continent. It is notable that tactical battles play a much larger part in Serie A and La Liga than in the Premier League. Italian coach Marco Tardelli commented that, “The English don’t want to understand tactics.”

Many point to England’s insular and at times arrogant attitude as a factor in their failure to absorb the best of European football’s tactical and technical innovations. England invented and codified the game. They are, along with Scotland, the oldest international football team in the world. It is notable that England were initially hostile to the idea of the World Cup, not participating until 1950 - the justification being that English football had little to learn from abroad.

This stunted the development of the English game in the twentieth century. It was only in the 1990's, with the formation of the Premier League and the influx of foreign players that methods started to change. Nevertheless, English football still leaves a lot to be desired in comparison to the likes of Spain and Germany.

The Premier League is the most watched and most lucrative football league in the world. It attracts some of football’s finest players, and English clubs are a common presence at the highest level in Europe. It is heralded as one of the few success stories in English football.

However, the flipside is the steady stream of foreign players. Today, only 35% of players in the Premier League are English. It has long been argued that opportunities for young English talents are now limited, as they find themselves squeezed out in the globalised English game. It is claimed that clubs put less emphasis on developing English players within their ranks, instead opting to buy in ready-made foreign imports.

Again though, this may be down to the dearth of quality English players being produced. Germany and Spain both have significantly more home-grown players in their leagues, suggesting superior youth development.

The FA has faced fierce criticism for its amateur and disorganised approach to governing football. An example of this being the FA’s inability to enforce a winter break in England. A pause in games during January occurs in most major European leagues, meaning their players seem less fatigued than the English come summer tournaments.

The FA has been unable to persuade competing interests in English football to agree to something similar. It is symptomatic of a footballing culture that is reticent to putting the needs of the national team first.

Moreover, the FA’s managerial appointments have left a lot to be desired. They have often gone for safe, but ultimately uninspiring choices, as seen in the appointments of men like Steve McLaren and Roy Hodgson.

Do English players simply lack the mental toughness and winning temperament? Their penalty shoot-out record suggests that aspects of this might be true. Few nations have capitulated from the spot as many times as England.

This inability to deal with pressure is also evident in the way England plays. All too often England come across as cagey, afraid to take risks with the ball. Rarely do players seem to enjoy expressing themselves when donning the England shirt.

The hopes of a nation and the weight of history sits heavily on their shoulders. This comes back to the pundits and fans unrealistic expectations for the team. Every tournament brings hype that ends in a vicious backlash once the team have been eliminated.

Perhaps it is time for the English public to come to terms with the fact that England are not a major force in international football, nor are they entitled to be.

The Greatest Events in Sporting History" is available to download from http://www.simplysyndicated.com/shows/sportinghistory/, e-mail us at sportshistoryshow@googlemail.com and you can follow us on Twitter @TGEISH
Posted by Shane at 16:04