The Lottery That England Must Win 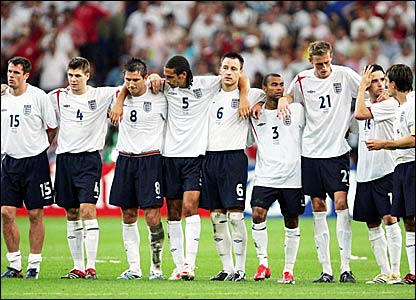 Amongst the well-worn cliches that cause my eyes to roll in annoyance is the one regarding the nature of the penalty shoot-out. You know the one, the one that involves the words "penalties" and "lottery". If you haven't heard it before, then pay close attention to the football punditocracy over the next month. You will.

The penalty shoot-out is possibly the most gut-wrenching way to lose a match. Maybe even more so than conceding a goal in the last minute. Losing on penalties means that your opponent was unable to beat you in the 120 minutes alloted for a winner to be decided.

But sometimes that's not enough. And it seems that England have failed so many times that they are unable to reconcile this fact. The pressure put upon the England side by the fans and media is intense and has led to the vilification of players and coaching staff when England fail to reach such high levels of expectation. However, when England have been beaten on penalties, the men culpable have avoided such vitriol.

Now I think that is a good thing. As has been often pointed out, the mental courage it takes to step up to take a spot-kick with the pressure it entails deserves praise. But England's repeated failures at this part of the game have resulted in the perception around penalties to be disproportionate. And it was a Portugese who inadvertently showed this up.

Back in 2005, Chelsea were surprisingly knocked out of the Carling Cup on penalties by Charlton Athletic. In the post match reaction, the then manager Jose Mourinho, refused to hold his team accountable for the loss, essentially claiming that a defeat on penalties isn't truly a defeat.

Sounds ridiculous doesn't it? But don't scoff, as this same mindset has afflicted English football for two decades. A penalty loss results in an outreach of empathy for the players. Good, but this shouldn't absolve them from any kind of criticism. Here's the fact that England are yet to deal with - penalties are not a lottery. They are a test of nerve, plain and simple. The thing to understand is that a player should never actually miss a penalty. It's a free shot at goal from 12 yards, dead centre of the goal, with no pressure on the kicker from any opposition player. If that chance appeared in open play fans would howl in frustration at a failure to convert the chance. Whether you lose on penalties or lose after being beaten 3-0, it has the same outcome. You go home in defeat either way.

Now I'm not suggesting that we lambast players for failing to score from the spot, but we must understand that a miss results because a player failed to hold his nerve when it matters most, not because he was unlucky. A golfer who misses a putt or a basketball player who misses a free throw isn't regarded as unfortunate so why is it different for footballers? It isn't. If it was such a random occurrence, then England would not have lost as many as they have done. And looking at the history of sides who win major international competitions, they often negotiate a penalty shoot-out successfully. Spain in 2008, Italy in 2006, France in 1998, Germany in 1996... I think I've made my point. It doesn't matter how good you are, to beat the best your nerve has to hold for longer than your opposition in order to be victorious.

So while Fabio Capello and his coaching team will be working on conditioning, tactics and the team spirit, he must also find the panacea to prevent England becoming crippled by nerves when the inevitable shoot-out arrives in South Africa. The England players say they believe they can win the World Cup. Well then, by extension, they must believe that they can beat anyone - even the masters of the format, like Brazil & Germany - when it comes to spot-kicks. If they can surmount that Everest, then Rio Ferdinand could be lifting that 14 inch gold trophy on July 12th.

ENGLAND'S FAILURES - How England's nerve has let them down since 1990:

England's first three penalties were faultless. However, so were West Germany's. Then England's most trusted penalty taker, Stuart Pearce opted to shoot down the centre of the goal, got his angles wrong and fired against the legs of keeper, Bodo Illgner. England had lost the momentum, their nerve and Chris Waddle sealed England's fate by panicking and blasting the ball over the bar.

England were riding the crest of a wave, winning their first and only shoot-out against Spain in the previous round. They only needed four spot-kicks to best the Spaniards. They comfortably converted five against Germany and still lost. England hadn't planned for the eventuality of sudden death. Germany had. An unprepared Gareth Southgate hit a callow penalty that Andreas Kopke easily saved. Germany's Andy Moller was ruthless in the face of a hostile Wembley crowd and sent Germany through to the final.

Probably the most infuriating England penalty defeat of them all. England's dogmatic coach, Glenn Hoddle obstinately announced that England had not practiced penalties as it's impossible to replicate the pressure of a shoot-out in training. Now by that rationale, there would be no point in practising anything. Despite this, England had a chance to lead 2-1 after David Seaman saved from Argentina's Hernan Crespo. They failed. Paul Ince was unable to keep his head and the score stayed 1-1. Argentina were not to slip up again. Carlos Roa saved England's final penalty from David Batty and England were sent home.

I have a strong measure of empathy with England here. Scoring four or five penalties are normally enough to win in a shoot-out. Not only did England manage this, but they were scored with a degree of confidence. Especially the ones from Ashley Cole & John Terry. Yes, John Terry (look it up, it was a measured finish). The penalty spot was in a disgraceful state and David Beckham shanked his penalty high & wide. He could clearly be seen bemoaning its condition, but it was the same for both teams. Portugal's Rui Costa also missed and in a moment that made my heart sink, Gary Neville could be seen smirking. As well as being devoid of class, England hadn't even won yet. And they didn't. They once again failed to cope with the pressure of sudden-death. Darius Vassell was unable to get a clean strike off the now crumbling penalty spot and the Portugese goalkeeper Ricardo not only saved from Vassell but then rifled home the winning penalty to send England out.

Portugal goalkeeper Ricardo was back to haunt England again. After the game he said that England players "saw the devil" when they faced him from 12 yards. While it's a melodramatic statement, it was hard to disagree after this penalty competition. This was England's nadir in shoot-outs. They failed with three of their four penalties, with normally reliable penalty takers like Frank Lampard & Steven Gerrard looking beaten men even before taking their spot-kicks. They looked like men walking The Green Mile as they approached the ball. Never has England's lack of nerve under football's highest pressure situation been more evident than on that muggy afternoon in Germany. While some of England's past defeats were down to the failures of one or two individuals, this was a collective shortcoming. They were never in the shoot-out and were comprehensively dumped out by the Portugese. This wasn't a defeat. It was a demonstration of the relationship that England has with penalty shoot-outs in a nutshell.


Don't forget to download 'The Greatest Events in Sporting History' Available at http://sportsevents.libsyn.com/, e-mail us at sportshistoryshow@googlemail.com and you can now follow us on Twitter @TGEISH.
Posted by Unknown at 15:44