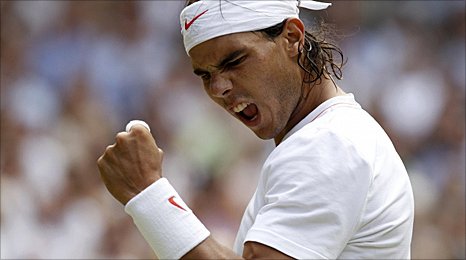 Rafa Nadal produced an awesome display of ruthless power hitting to crush Andy Murray's dreams of ending the British title drought at Wimbledon. The World Number 1 showed why he is just that by producing (bar the final of 2008) his best ever performance at SW19.


While he will no doubt be inconsolable for a few days, Murray should realise that his defeat was not due to a substandard display on his part. While not at his very best, he would have beaten the majority of tennis's elite with his performance. He served excellently in the first two sets and hit his groundstrokes deep in the court. And it wasn't a failing of mentality or belief either. Murray has proven that he can be Nadal's equal in the past, bringing the Majorcan to his knees back in January at the Australian Open.

At one stage in the third set, the Scot had even won more points than Nadal. Despite the straight sets victory, this was not a straightforward win for the Spaniard. The key was that Nadal won all the major points in the contest, with his forehand firing as good as I've ever seen it. He barely missed a passing shot all afternoon and gave Murray nothing to work with.

This was the ultimate 'Spanish Inquistion'. And unlike the Monty Python sketch, Murray fully expected it. But knowing what's coming and finding an answer to the questions posed are two very different things. While most of the match was on a knife edge throughout, as it progressed I couldn't shake the feeling that Murray was being lowered onto Nadal's own personal torture rack. Murray has the fight and stubbornness of a pitbull, but eventually even he had to succumb to the pressure. In many ways, it was a reverse of their match at Melbourne Park.

Murray was good but Nadal was great. I don't think even Roger Federer could have lived with him after a performance like that. Nadal is only 24 and is already one of the all-time greats. A repeat performance in Sunday's final could result in a very short match and a second Wimbledon title for a man who is - lest we forget - a clay court specialist. If anything grass is his weakest surface.

Murray was under no illusions in his post-match interview, saying that he needed to go away and work even harder to try and match the likes of Nadal and Federer. But perspiration may not be enough to reach tennis's summit. 'Iron Man' was inspired today and I think that Murray may need to add a touch of magic to his own game before he claims one of the sport's big prizes.


Don't forget to download 'The Greatest Events in Sporting History' Available at http://sportsevents.libsyn.com/, e-mail us at sportshistoryshow@googlemail.com and you can follow us on Twitter @TGEISH.
Posted by Unknown at 18:23