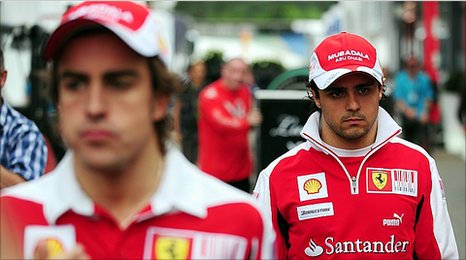 Anyone who has an elder sibling has probably had to go through the experience of feeling marginalised. Whether it's when receiving the cheaper presents on Christmas Day, having to wear their 'hand-me downs' at the end of August - just in time for the new school year - or getting less pocket money at the end of the week (do parents even bother with pocket money these days and if so, is 'pocket money' even the correct term? Christ I'm old) it's easy to feel like your parents have earmarked their affections for the child who came first. It's not that they don't love you as well but the elder sibling was always part of the plan. You were more of a alcohol-fuelled afterthought.


I don't know if Felipe Massa is the younger sibling in his family, or even if he has any brothers or sisters. But in the German Grand Prix yesterday, the family known as the Ferrari Formula 1 team have made it very clear who is the favoured son in this schism.

In what has been a compelling and closely fought title race was sullied by Ferrari's shameless flouting of the sport's laws. In ordering Massa - who had been leading the race - to deliberately allow his team-mate Fernando Alonso to bypass him on the track to victory is not only against all ethics of competitive sport but strictly forbidden under the laws of Formula 1. This ruling has been in place since the farce of the 2002 Austrian Grand Prix when Ferrari pulled a similar stunt in getting Rubens Barrichello to step aside to allow Michael Schumacher to take the chequered flag.

However while Ferrari received widespread and deserved condemnation for their actions eight years ago, I found yesterday's events left even more of a nauseating taste. At least Ferrari made no attempt to hide their behaviour back then. It may have been brazen but they didn't add the transgression of acting duplicitously to their blatant flouting of the rules. If you're going to be a cheat at the very least own up to it.

As Alonso desperately tried to overtake Massa to get the win he needed to propel him back into the World Championship picture, the Ferrari team were conspiring to ensure that Alonso would be the Grand Prix's eventual winner, by fair means or foul. As with most conspiracies, it was its subject who was the last to know. Knowing that directly instructing Massa to step aside would land Ferrari in hot water, on lap 47 his race engineer Rob Smedley said over the car radio, "Ok, so Fernando is faster than you". But Massa had not deviated from his own plan to try to win the race, so a lap later Smedley appears on the open radio channel again with the following, “Can you confirm you understood that message?”

And for those of you who are yet to get the message, what Smedley was saying is, "Move your Brazilian behind out of the way and let Fernando win!" A lap later, the die was cast. Massa acquiesced to his team's request and the rest of the race became a procession towards a Ferrari 1-2 finish. Just not the 1-2 finish we would have had in a fair contest.

Now seeing as Ferrari have clearly tried to cover their tracks by not explicitly asking Massa to allow Alonso to win, Smedley's radio contact with the Brazilian on lap 49 was astounding as he tried to placate Massa, “Good lad. Just stick with him now. Sorry.”

Why apologise? If everything was above board what on earth do the Ferrari team have to feel so contrite about? Not only did they violate the sport's laws, but they made a right Horlicks of doing so.

The pathetic charade continued in the post race press conference with Alonso responding to queries of cheating by stating, "I don't know what happened, but at the exit of turn six I saw Felipe a little bit slow. Sometimes you are quick, sometimes you are slow, and in some parts I was quicker than him, so it's very difficult to judge". Massa, whose post race demeanour spoke volumes would only say, "I don't need to say anything about that. He passed me."

Now it seems that the bulk of the blame has shifted onto the shoulders of Alonso. And while you can count me on the long list of people that wouldn't lend him £1 for the bus even if my pockets were bulging with spare change, it misses the point. I have repeatedly stated that the character of a person is circumstantial when it comes to the sporting arena. My only concern is professional. I'm not interested in whether Alonso gives him mum a call on Mother's Day, what's he like behind the wheel of a Formula 1 car? The Spaniard's track record proves he is one of the best around (indeed, he was my tip to win the World title this year) but his petulance on the track not only shows him in a negative light, but it also emaciates the sport that has made him a star. And that is something I refuse to ignore. His appalling comments on lap 21 of the race must have left any fan of Formula 1 wanting to put their foot through the screen of their television. After a failed attempt to pass Massa, he was heard wailing on the team radio, "This is ridiculous!"

People should have sensed that something was rotten in Denmark from that moment. Ridiculous? What was Fernando? The fact that Massa and the other drivers were under the misapprehension that they were in a contest where the best man on the day wins? Well be thankful that the Ferrari pitlane gave your team-mate and all who follow the sport a 're-education'.

Now it is no secret that Alonso is Ferrari's Number 1 driver. This is common in Formula 1 and is borne out by the main man getting the more extensive race preparation and the best use of the race equipment. And yet that wasn't enough for Alonso. The fact that he not only demanded, but expected Massa to be a supporting player in his own personal one man show is obscene. When sporting events are not allowed to take their natural course, then they truly lose all meaning. We can't even suspend our disbelief for the 'mock-battle' nature of it all, convincing ourselves for a few brief moments that what we are watching is the most important thing in existence. It's like going to the cinema to watch 'Inception' already knowing that Leonardo DiCaprio...... don't worry, even I'm not that cruel.

And also, if Alonso was going faster than Massa, (as Smedley claimed on the radio) then why on earth could he not have overtaken him without resorting to cheating? So you're the faster driver are you Fernando? Next time, bloody well prove it.

The FIA's immediate response was to find Ferrari guilty for issuing team orders, and fine them $100,000 (roughly £65,000). Given that Alonso earns that much in about a day, they might as well have written a disgruntled letter of complaint for all the good it'll do. If this is the limit of the FIA's punishment then not only does it make them look feeble but it is an ineffectual deterrent to another team in the paddock trying a similar thing in the future, or Ferrari - God save us - fixing the result in yet another Grand Prix before the season's end.

But there is still hope. The FIA have launched an inquiry into the whole affair, and even though the organisation's figurehead, Jean Todt, is an ex-Ferrari man and responsible for issuing the instruction back in 2002 that precipitated the whole "no team orders" rule in the first place, I dearly hope that justice prevails. At the very least Alonso & Massa should be disqualified from the German Grand Prix and be stripped of the points they accrued in Hockenheim. But I have will have no empathy with them (with the marginal exception of Massa) if more severe measures were to be taken against the Italian team.

In what had been a season that was restoring the credibility back into Formula 1, its integrity has taken another hefty blow, and it will only be exacerbated if the FIA's final judgement on Ferrari is a callow one. Apart from anything else, if Alonso was to go on to win the World Championship this year, then the title & the sport would be so defiled that Formula 1's days as a major sporting competition could be finished for ever.


Don't forget to download 'The Greatest Events in Sporting History' Available at http://sportsevents.libsyn.com/, e-mail us at sportshistoryshow@googlemail.com and you can follow us on Twitter @TGEISH
Posted by Shane at 01:48