The Ashes - Player by Player 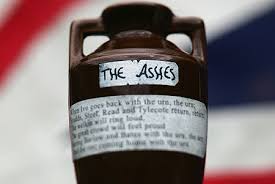 In a few hours time, the first ball of the 2010/11 Ashes series will be bowled at the GABBA in Brisbane. Like the World Cup, there will be a numerous posts on here about the contest as it progresses over the next five and a bit weeks. So to start with, here's a quick rundown on the players from both teams who will battle for one of cricket's most coveted prizes:

Andrew Strauss - England's captain and batting lynchpin. Australia make no secret of their propensity to target the opposition captain, particularly when the opposition is England. Batting at the top of the order, Strauss will look to set a positive tone from the start. Australia will look to undermine England by making their skipper look vulnerable. How Strauss performs in Australia is key to England's hopes of retaining The Ashes.

Alastair Cook - Came close to losing his England place earlier in the summer but has looked in decent form in the warm-up matches. Former England captain Mike Atherton observed that Cook often looks to be in a constant battle with his technique when he bats. Will have a massive bullseye on his chest when he walks out to bat in Brisbane. It's said that a chain is only as strong as its weakest link. How strong this England team are will probably be determined by how well the Essex man performs this winter.

Jonathan Trott - For some reason Trott seems to be England's scapegoat as far as the press as concerned. Ignoring the fact that he probably shouldn't be allowed to play for England, I'm a fan. He's dogged and can get under the skin of opponents. Even in the days of quick scoring, every team needs a player like Trott. While he may be batting a position too high at No. 3, he may come into his own in matches where England are under pressure from Australia's bowling attack.

Kevin Pietersen - An enigma who divides his own fans, let alone opposing ones. But he is worth persisting with as he remains the most talented member of the team. After a wretched summer, Pietersen has announced that he will be aggressive from the get-go against Australia. So expect him to swashbuckle at the crease, as well as delighting & frustrating England fans in equal measure. He may not perform at his best here, but one big score may be all that England need from him to keep hold of the urn.

Paul Collingwood - His worth to the England team was clear for all to see as his rearguard in the 1st Test of the last Ashes series was the first brick in the wall of England's victory in 2009. There is a slight worry however, that he's been dining out a little on past glories. Collingwood's recent form has been poor & he needs a strong showing in Australia to keep Eoin Morgan from taking his place in the side.

Ian Bell - Was often regarded as a punchline in Australia in the past and will be sure to be on the receiving end of some fearful verbal abuse this time around. But Bell appears to be a changed man in the past 12 months. There is a new found mental strength to his stylish talent, and he is a good outside bet to be the leading run scorer in the series.

Matthew Prior - In the absence of England's batsman making centuries in the last Ashes series, his lower order runs proved crucial. There is little doubt that this will be required again. Like Bell, Prior is another who has matured into a top class cricketer. If he scores big over the next few weeks, it'll make England's chances of retaining The Ashes a whole lot easier.

Stuart Broad - His match winning performance at The Oval in 2009 was the making of him. Broad's father was part of the last successful England team to win in Australia, and he's never allowed his son to forget it. Both sides look to have stronger batting line-ups than bowling ones, but in Australian conditions, Broad could shine with the ball. As long as he can keep his temper in check - and it'll never be put to the test more than surrounded by a hostile Australian crowd - I wouldn't be surprised to see him as England's leading wicket taker.

Graeme Swann - There is a lot of pressure on Swann. He is now the world's premier spin bowler and will be expected to bowl England to Ashes glory. And Swann wouldn't have it any other way. His temperament is, well for want of a better term, 'Australian'. While the pitches won't be conducive to spin bowlers, up to now Swann has proven himself able to take wickets in any conditions. While he may not take a stackful in this series, if he can be England's go-to guy whenever an Australian batsman is well set, then that would constitute a good series for him.

James Anderson - The ostensible leader of England's attack, but has yet to show his best against Australia in the past. And Anderson's preference is to swing the ball. Australia is not the place where this happens much. He will need a Plan B to avoid becoming cannon fodder. This winter may determine whether Anderson will go down as an England bowler of genuine repute, or as an honest trier who could only ever succeed in favourable conditions.

Steven Finn - Finn's progress over the next few weeks will be interesting. He has impressed so far in his short England career and has a mature & even-handed approach to his bowling. But bowling in Australia will be unlike anything the 21 year old has faced before. If he keeps a tight rein on his line & length then his height will make life very uncomfortable for Australia's batsman. But he has to hit the ground running as Australia's batsman will not allow Finn to bowl himself into form.

Simon Katich - Grizzled veteran who, like his predecessor Justin Langer, is a hardened and awkward customer. But comes into the series short of fitness and form. If he is allowed to play himself into good nick then he will be a thorn in England's side. England must target him early.

Shane Watson - He's not an opening batsman and has a sieve-like technique. But the triumph of Watson is that he has overcome these faults to be one of his team's key players. The fast pitches in Australia suit his aggressive approach to the game, and his ability with the ball must not be underestimated. Depending on the opening exchanges, Watson could be the star of the series.

Ricky Ponting - This will be Ponting's final embarrassment or his final triumph. His recent Ashes fortunes have fluctuated and the Aussie press have their knives out in the event of a home defeat. But there will be no man more determined to win this winter than the Australian skipper. But can a 'will to win', no matter how resolute, be enough. We'll soon find out.

Michael Clarke - Has suffered with poor form and rumours of unpopularity amongst his own teammates. But Clarke remains a class act. A glorious sight in full flow, he's another batsman who must not be allowed to garner momentum, as he's potentially the competition's leading run scorer if he gets his game right.

Michael Hussey - Scored a century for his state side last week, but Hussey has been clinging onto his Test place for a while now. I'll be surprised if he stays in the team by the time the series reaches Sydney next January. I could be proved wrong but Hussey could be made into Graeme Swann's 'bunny' over the next few weeks.

Marcus North - Another who is under pressure to keep his place in the side. He has a maddening trend to either score big runs, or not score at all. Like Hussey, he will have to beware the threat of Swann. Australia's weakness in the spin bowling department means that he will probably have to give his right arm a twirl as well. Whether this distracts him from his batting or galvanises it remains to be seen.

Brad Haddin - The Australian cricket system deserves credit for providing an adequate replacement for the retired Adam Gilchrist. Haddin is no Gilchrist, but that's because Gilchrist was one of a kind. Haddin remains a solid wicketkeeper and a combative batsman. England must not think that they've got the job done once they get through the middle order. Haddin is a tough competitor and will be hard to shift.

Mitchell Johnson - If Kevin Pietersen is England's enigma, then Johnson is Australia's. Bowls with searing pace and wicked late lateral movement. If he could only bowl at the stumps consistently he'd be a world beater. Johnson had a miserable time in England in 2009, but he has an excellent record in his own country. And if he can raise his game to a high level from now till January, he could be a match-winner.

Peter Siddle - The archtype of the Australian fast bowler. Cocksure, mouthy and indomitable. Siddle will leave every ounce of sweat on the field for his team's cause and will keep England's batsman honest throughout. But Siddle has been on the shelf for almost an year and there's a difference between being fit and being match-fit. How quickly Siddle can close that discrepancy will determine how well he'll play.

Xavier Doherty - The surprise pick in the Aussie line-up. Doherty's inclusion only serves to highlight the paucity in Australian spinners since the great Shane Warne retired. For whatever reason Ponting clearly didn't trust the previous incumbent, Nathan Hauritz, and as Pietersen has shown a weakness to left arm off-spinners, he has gambled on Doherty. It will either prove inspired selection or absolute folly.

Ben Hilfenhaus - Australia's Mr Dependable. Hilfenhaus was Australia's best bowler in the last Ashes series and shows such consistency that England's batsman will struggle to get on top of him. But he lacks the pace to blast sides out on his own. Expect him to finish the series with a healthy total of wickets, but he will need help if Australia are to regain The Ashes over the next five Test matches.


Don't forget to download 'The Greatest Events in Sporting History'. Available at http://sportsevents.libsyn.com/ or at www.simplysyndicated.com, e-mail us at sportshistoryshow@googlemail.com and you can follow us on Twitter @TGEISH
Posted by Shane at 12:50