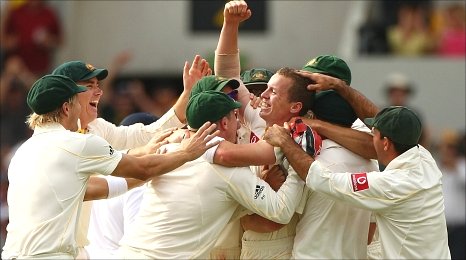 Peter Siddle celebrated his 26th birthday with a hat-trick to give first blood to Australia on the opening day of the 2010/11 Ashes in Brisbane. An awesome display of seam bowling in the final session of the day broke the back of England's first innings.


While the furore around the opening exchanges of an Ashes series is overstated, there's no doubt that an enthralling day's cricket has ended with Australia in the ascendency. The only thing that ostensibly went England's way was Andrew Strauss winning the toss and deciding to bat first. The wisdom of that decision will not become clear until Australia have completed their first innings.

England start to the match was disastrous. With only the third ball of the game, Ben Hilfenhaus dropped short & wide, right into Strauss's hitting zone. But the England skipper cut straight to Michael Hussey in the gully. Strauss was dismayed. It was a ball that should have got him and England off the mark. Instead they were a man down without scoring a run.

From then on it was very nip & tuck. Alastair Cook took the anchor role with the rest of England's batsman playing around him. In the Test Match Special commentary box, Geoffrey Boycott observed that the contest was like two boxers sizing each other up, declining to use their big shots. Normally in Australia, fast bowlers are encouraged to bowl just short of a good length, using the hard and fast pitches to trouble batsman. England had negotiated this tactic and it was Siddle who was shrewd enough to change tack and change the course of the match.

He had begun to bowl a fuller length and was also picking up just enough lateral movement to remove both Kevin Pietersen & Paul Collingwood. Pietersen had looked impressive. Collingwood looked awkward and needs to get some runs soon. And then at 197-4, Siddle wrote himself into Ashes history.

He produced an excellent ball to dismiss Cook, bringing the England vice-captain forward and finding his outside edge. Australia's slip catching was faultless all day and Shane Watson made no mistake at second slip. Matt Prior was next to the crease and he played all around a full ball from Siddle to have his stumps uprooted. He only lasted one ball and Siddle was on a hat-trick.

The Brisbane crowd roared as Siddle bowled to Stuart Broad. The man from Victoria produced a wicked inswinging delivery that struck Broad on the boot. Umpire Aleem Dar (who also had a magnificent day) raised his finger and Siddle became only the fourth Australian to take an Ashes hat-trick. It was full reward for a brilliant display of bowling and England went from keeping their opponents at arm's length to being put on the floor with a vicious Australian haymaker courtesy of Siddle.

England's Ian Bell did his best to steer his team towards a respectable score. Bell batted wonderfully to score 76, and had he not been forced to recklessly swing the bat, he surely would have had his first Ashes century. Too many of England's middle order let the side down. Cook, Bell & probably Broad apart, England's batsman gave their wickets away, and a disciplined bowling display (apart from Mitchell Johnson) took full advantage.

England had seven overs in the field to try and eke their way back into the Test match, but they failed to replicate Australia's discipline with the ball. Both James Anderson & Broad were wasteful with their direction and they will have to find their radar on Day 2 or this Test will disappear from sight fast.

But as far as Day 1 goes, we should salute and celebrate the skill of Peter Siddle. He produced a truly great fast bowling display that will never be forgotten. And it's left England dazed. They need to rouse themselves promptly and come out swinging later tonight.


Don't forget to download 'The Greatest Events in Sporting History'. Available at http://sportsevents.libsyn.com/ or at www.simplysyndicated.com, e-mail us at sportshistoryshow@googlemail.com and you can follow us on Twitter @TGEISH
Posted by Shane at 08:07