The Ballon D'or - Who Should Win? 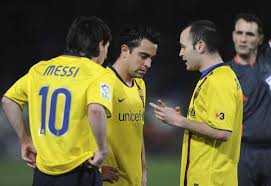 While FIFA are currently the number one topic in the British sports media due to their controversial awarding of the 2018 & 2022 World Cups to Russia and Qatar, they announced news today that thankfully deals with the actual game rather than their murky machinations away from the pitch.


The Ballon D'or (which is the award that goes to the world's best footballer) nominations were revealed. And the three nominees are telling. They are all Barcelona players, Xavi Hernandez, Andres Iniesta & Lionel Messi.

Not only does this speak volumes for the quality of Barcelona, but it's worth mentioning that these players are all...shall we say, diminutive. All three men are only 5'7". They use pace, guile and incisiveness rather than power, strength and brute force to succeed. In an era where sport relies more on athleticism, tactics and statistics to find an edge, it heartens me to see that there is still a place for cavaliers in a game increasingly populated by roundheads.

A wearying trend of the Ballon D'or in recent times has been to award it to the star player in the most recent World Cup or European Championship. This reached its nadir in 2006 when Italy's Fabio Cannavaro was the winner. Even though Cannavaro had an outstanding World Cup, the fact that the voting populus seemed to ignore the other 11 months of the year baffled and infuriated in equal measure. And the Ballon D'or isn't voted on by a faceless committee. Every national team coach & captain gets to vote, rather than the besuited men in the corridors of FIFA.

So the nomination of Messi should be applauded. He received unfair criticism for underperforming in South Africa this summer, when in fact, he was one of Argentina's best players without reaching his best. I would direct blame more towards the manager, Diego Maradona, a man who probably thinks tactics are a brand of breath-mint rather than something essential for any team to win a World Cup.

Let's not forget how incredible Messi has been for his club. In this calendar year he has scored over 50 goals, and was the go-to guy during their second successive La Liga title win. His mind-blowing display against Arsenal in the Camp Nou is one of the greatest individual performances from a player that it has been my privilege to witness. But despite all this, I wouldn't give the Ballon D'or to Messi. I do concede that most years his achievements in 2010 would be enough for him to retain the award he won last year. But let's look at the other two contenders to see if they deserve it more.

I am an unashamed fan of Andres Iniesta. My post on the World Cup final doubled up as a love letter to the Spaniard. Throughout the tournament he often was the man to break through stubborn defences when Spain needed a goal, never more so than in the final. He has developed a happy knack of performing in big games, with his global breakthrough coming in the 2009 Champions League final, where he led Manchester United a merry dance, receiving a round of applause from both sets of supporters.

I love his low centre of gravity when he dribbles through tackles. Similar to Messi but slightly more elegant, he often gives the illusion of gliding across the pitch. His nickname of 'the glowworm' is very apt as he often lights up a match. However, to award Iniesta the Ballon D'or would be another example of what I was bemoaning earlier. While Iniesta had a good club season, he only really shone at the World Cup. And it would not be right to for him to win based on showing his best over a few weeks in June & July. Also, I feel there's more to come from Iniesta. He still doesn't score enough goals for an attacking midfielder and can be kept quiet in games when marked tightly.

So now to Xavi. The orchestrator of Barcelona & Spain's 'passing carousel' (a phrase which all journalists & bloggers owe a debt to Sir Alex Ferguson). If it was down to me, he would be my winner. He is the epitome of everything I like to see in a footballer - close control, composure, rapier like wit and vision, and an ability to move the ball as if it's under the power of remote control. Cesc Fabreagas once spoke on a key component of his coaching as a child. Fabregas has said that he was constantly encouraged to see the whole pitch as the game progressed, not to think in a narrow box of solipsism, but to watch how a match unfolds and react accordingly. Simply put, it's the hockey legend Wayne Gretzky's philosophy of, "Don't go where the puck is, go where it's gonna be."

Xavi operates as if watching the game from a position in the top tier of the crowd, able to see every player and every pocket of space in which to hurt the opposition. And Xavi hasn't been doing this for the past year. He's been doing it for the past ten years. As he begins to approach the final years of his career as a top-level player, it would be fitting for him to receive football's most prestigious individual award.

But make no mistake, this wouldn't be a lifetime achievement award. As mentioned earlier, Messi has had an astounding domestic year, while Iniesta had a brilliant World Cup. Xavi is the only nominee to have both, and as such would be my pick as winner of the 2010 Ballon D'or.


Don't forget to download 'The Greatest Events in Sporting History'. Available at http://sportsevents.libsyn.com/ or at www.simplysyndicated.com, e-mail us at sportshistoryshow@googlemail.com and you can follow us on Twitter @TGEISH
Posted by Shane at 12:14