All Hail The (Nearly) Invincibles 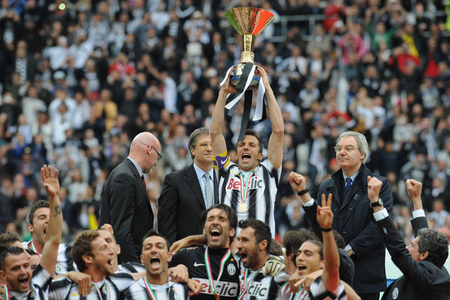 
2006 is forever remembered as a golden time for Italian football, with the national side winning that year's World Cup. But Italy's international glory was sullied by a story much closer to home. It can be summed up in one word: calciopoli.

The scandal that rocked Italian football sent shockwaves throughout Serie A, and those tremors were felt most keenly at Juventus. The then reigning champions were stripped of their two previous league titles, and demoted to Serie B, starting the following season on -9 points. This was incredibly damaging to The Old Lady - arguably Italian football's most famous club side. Unsurprisingly, a lot of the playing & coaching staff didn't come to Turin to play in the second-tier, and as a result, there was a mass exodus. The only significant exceptions were players, Pavel Nedved, Gigi Buffon and club captain, Alessandro Del Piero. To put it into a more localised context, imagine Liverpool being relegated to the Championship, and the only noteworthy players who remained at the club were Steven Gerrard, Pepe Reina, and Lucas Leiva.

Despite this, they were immediately promoted the following season. However, a return to their glory days seemed far off, as they were still playing catch-up - both in terms of finances and personnel - on their domestic rivals. For four seasons, they went trophy-less, and in the most recent two league campaigns, they finished in the ignominious position of 7th.

Club President Andrea Agnelli was desperate to return to club to its once assumed position as Italy most pre-eminent club. He appointed former Juve player, Antonio Conte as the new head coach. Conte was a cult figure as a player, and had success as manager of Siena. However, taking over at Juventus was a huge step up, and many questioned whether he would be out of his depth.

But Conte surpassed the hopes of even the most strident Juventini, winning the title and not losing a single match in the process. They almost made history by going unbeaten in all competitions, but lost last week's Coppa Italia final to Napoli.

What was most impressive about Juve's Serie A triumph was that it was achieved without a lead goalscorer, their top scorer being Alessandro Matri with only 10 goals. This was a success of the team ethic over the more gilded but disparate superstars of AC Milan. There seems to be a trend - popularised by Pep Guardiola at Barcelona - in European football for sides to play with boundless energy, swift counter-attacking and high pressing. It can be seen from Marcelo Bielsa's Athletic Bilbao, Walter Mazzari's Napoli or Jurgen Klopp's Borussia Dortmund. Well you can add Conte's Juventus to the list. His players performed with a work ethic that bordered on demented. Claudio Marchisio and Arturo Vidal provided class and industry in the midfield, Stephan Lichtsteiner was superb, whether playing full-back or wingback, rivalling Dani Alves as the game's premier right-sided defender, and the centre-halves, especially the indomitable Giorgio Chiellini (who was badly missed in the Coppa Italia final) offset the goal-shy forward line, such was their defensive solidity. They only conceded 20 goals in the league all season.

But the crowning glory was the acquisition of Andrea Pirlo. Unwanted at AC Milan, Pirlo disproved Sir Alex Ferguson's theory that there's "no value in the transfer market", as Juve signed him on a free transfer. Pirlo was reborn, controlling games with a combination of nous and his sumptuous technique. His remarkable passing quality hasn't left him, and operating in a deep-lying midfield role, he was the metronome of the side. All good that came from Juventus, invariably passed through the conduit that is Pirlo, and playing in 41 matches in league and cup displayed that the 33 year old still has the stamina to carry him through a full season.

All this occurred in the brand new Juventus Stadium. Having spent the bulk of their existence in the cavernous but funereal Stadio Comunale and Stadio Delle Alpi, their new stadium was brimming with life, a place with a sparkling atmosphere to match a team with Juventus's proud history.

And that history now looks a little bit more grand. Only twice before in Serie A had a side gone a whole league campaign unbeaten (Perugia in 1978/79 & AC Milan in 1991/92), but Juventus in 2011/12 are the only club to have done so in a 38 game season. Even if Conte has already peaked as a manager, he's given us a team - in the true sense of the word - that will be remembered for as long as football is played.

"The Greatest Events in Sporting History" is available to download from http://www.simplysyndicated.com/shows/sportinghistory/, e-mail us at sportshistoryshow@googlemail.com and you can follow us on Twitter @TGEISH
Posted by Shane at 23:29