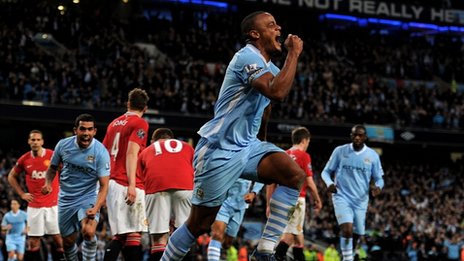 The tectonic plates of the Premier League title race shifted once again in an impassioned night at the Etihad Stadium. The lead at the top of the table changed hands for the 11th time this season as Manchester City beat their rivals Manchester United to grab the initiative with only two games of the league campaign remaining.


The atmosphere in the lead-up to the match was as feverish as the media hype beforehand. However, the early exchanges were infuriating to watch. It was everything that some people love about English football, and what I loathe. The pace was frenetic and full of commitment, which made it an intriguing spectacle, but the quality of play was woeful. Both sides - especially City - seemed unable to find a teammate with the most basic passing moves.

It looked as if the more experienced (and calmer?) heads of Ryan Giggs, Paul Scholes and Michael Carrick would prevail in the crucial midfield battle. However, City soon took grip of the centre of the pitch, and with it, the narrative of the contest.

Coaxed by the promptings of Gareth Barry and the rampaging hustle of Yaya Toure, City often found themselves in the final third of the pitch. Of City's attacking quartet, it was Samir Nasri who looked the most threatening. In conjunction with Pablo Zabaleta on the right-hand side, most of City's best moments came from the Frenchman. United's defence was managing the hold the fort, but the pressure increased as the first-half drew to a close.

And as the half-time whistle was imminent, a David Silva corner was powerfully headed in by City captain Vincent Kompany. While Chris Smalling's marking was lax, it was an apposite embodiment of Kompany's personality. He forced his way into the six yard box, and attacked the ball with a ferocious zeal, which was matched by his manic celebration (you would have thought he had smashed the ball in from 30 yards). He knew what a big moment this was. It turned out to be the winner, a tangible example of the skipper leading from the front. This was an example of sport not building character, but revealing it.

Giving the history of Sir Alex Ferguson's sides, it would not have been strange to expect United to respond in kind in the second-half. But the Scot sent out the same XI that had started the game, which was a curious choice. He had opted to leave Danny Welbeck, Antonio Valencia and Ashley Young on the bench, while giving Ji-Sung Park his first start in 4 months. While Park has often been a go-to choice in big games, you wonder if we've already seen the best of the South Korean. He looked alarmingly off the pace, unable to plug gaps in the midfield or make an impact during transitional counters.

City continued their dominance, but as the clock drifted to the 70th minute, Mancini made the conscious choice to settle for the 1-0. He brought Nigel De Jong on for Carlos Tevez (slightly surprising as Tevez had a fine match), and instructed his charges to be more compact. With Young, Welbeck and Valencia all now on the pitch, it allowed United to have more of the ball, and things got heated after De Jong went through the back of Welbeck. Tempers flared on the two benches as a combination of the fourth official, and City coach David Platt, kept Ferguson and Mancini from becoming embroiled in a confrontation on the touchline - although it should be stated that both sets of players & coaching staff shook hands and behaved with dignity at the final whistle.

From a City perspective, their increasingly defensive mindset could have allowed the (current) champions back into the game. However, United were incredibly tepid in attack, being comfortably repelled by City's back four. They had an impressive defensive "square" down the centre of the pitch of Joleon Lescott, Kompany, Toure and Barry, competently firefighting any threatening situations.

Ultimately, City had more space to counter-attack with menace. Aguero kept Smalling & Rio Ferdinand occupied, while Toure looked more like the midfield dynamo that had terrorised teams before departing for the Africa Cup of Nations, which seemed to leave him emotionally and physically drained. Toure almost sealed the win on a 2 vs 2 break when he just shot wide, and in the last minute Nasri inexplicably opted against shooting when given a chance from point blank range. He tried to dribble his way around the scrambling United defence and the opportunity was lost. Mancini was apoplectic on the touchline, but he needn't have worried as United were unable to muster up a single shot on target.

It's that statistic that is the most damning for United. For a side who were 8 points clear a few weeks ago, their tailspin has been astonishing. Four points from the last four games is relegation form, and you have to wonder what the press reaction would be if this was displayed by any other side. What the reaction should be is simple. United had the title won, and they've choked.

Newcastle or QPR may still do them a favour, but the Premier League is now City's to lose. In his post-game interview, Kompany said the match was "the stuff you dream about as a kid". Well City have been dreaming about winning the league for 44 years. In two weeks time, that dream could become a reality.

Match Ratings for the two teams can be found here:

"The Greatest Events in Sporting History" is available to download from http://www.simplysyndicated.com/shows/sportinghistory/, e-mail us at sportshistoryshow@googlemail.com and you can follow us on Twitter @TGEISH
Posted by Unknown at 00:46