20+ : The Premier League's Mr Durable Does It Again 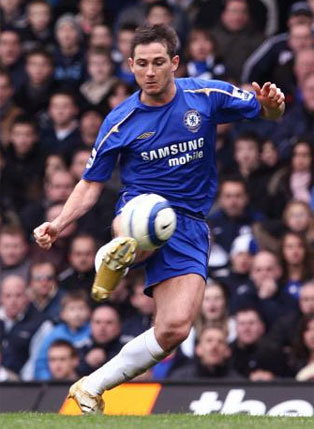 Amid all the off-pitch controversy that has engulfed Chelsea this season, for which I will avoid going into (that deserves a blog post all of its own), yesterday's 7-1 hammering of Aston Villa brought about something of a landmark where one player was concerned. That player was Frank Lampard.


Lampard scored four times yesterday, taking his total goals for the season to 21. This is now the fifth consecutive season that Lampard has scored 20+ goals in a season for Chelsea. What makes this all the more impressive is that Lampard is a midfielder, and can often be seen doing as much defending as attacking.

One thing that I think gets overlooked too much in sport is solid consistency. Maybe that's why Lampard has never been a beloved player by those outside his club. He's not a player who will beat two players with an outrageous bit of skill; party pieces are not his thing. What he does contribute is invaluable however - his scoring record stands alongside most attackers in World football, and it is no accident that Lampard scores as often as he does. People in football love to refer to how certain strikers have a knack for being in the right place, "Oh that Michael Owen, he knows where the goal is". So does Lampard. In Chelsea's two title winning seasons in 2005 & 2006, he was the reason why Chelsea didn't need a lethal finisher up front. They already had one in the middle of the park.

Added to this is his incredible durability over the years. Lampard holds the record for playing 164 games in a row between 2001 & 2005. In an age of players being rested this is an astonishing amount, no outfield player has come anywhere near matching it. It's a little known fact that Lampard played the entire 2006/07 season with a foot injury. Unable to flex the toes on his right foot, he still only missed one Premier League match, often having to captain the side in the absence through injury of John Terry. And ended the season providing the assist for Didier Drogba to win that season's FA Cup for Chelsea.

Despite all this, Lampard is by no means having an impressive season. Having had to play in different positions this season - for both club & country, allied to the fact that Lampard is now in his thirties have seen a slight dip in the high standards we have come to expect. And in spite of that, the stats don't lie. Lampard is the Premier League's metronome, the highest scoring midfielder in Chelsea's history.

Sir Alex Ferguson also took time to praise Lampard, saying "Frank Lampard is an exceptional player - a huge asset to Chelsea, You pay attention to players who can get goals from midfield and he's been averaging 20 a season.You don't see him getting into stupid tackles or making a habit of becoming involved in silly rows. He remained restrained after Chelsea were knocked out of the Champions League by Barcelona and even made a point of swapping shirts with Andres Iniesta." Of course, that doesn't sell newspapers, who instead focused on the petulant behavior of Didier Drogba & John Terry after that aforementioned match.

I always found the cold reaction many fans have towards Lampard quite baffling, especially as many of them voted him England's Player of the Year in 2004 & 2005. But make no mistake about it, Frank Lampard has been cherished by almost every manager he's played under. He's a coach's dream and will be thoroughly missed when he leaves the game.

Don't forget to download 'The Greatest Events in Sporting History' Available at http://sportsevents.libsyn.com/.
Posted by Unknown at 11:48