Terribly sorry, they're from Barcelona 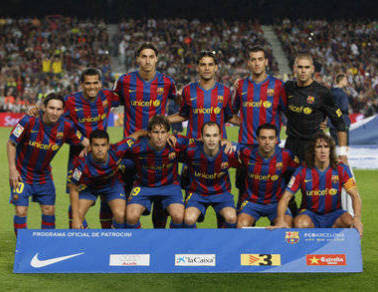 Can Barcelona be stopped? Maybe.

Tomorrow, Arsenal will face the might of the Spanish, European & World Club Champions, Barcelona. The Catalans are strong favourites to eliminate Arsenal over the two games they have in the next week. So what can Arsenal do – if anything - to progress to the semi-finals of the Champions League:


1) Compact the pitch – Like the Spain national side, Barcelona love to play through the centre of the pitch, using the inside left & right channels when they approach the opposition’s penalty box. It stands to reason that the less space Barca have to play in, the tougher it’ll be for them to find a way to Arsenal’s goal.

2) Keep Barcelona at arm’s length – This is an extension of my first point. When Barcelona are in possession of the ball, Arsenal must keep them away from their own 18 yard box. This can be achieved by pressing the ball high up the pitch. This means the likes of Nicklas Bentder have to put in a serious shift. Even the likes of Andrey Arshavin will have to turn workhorse for 90 minutes. If they pressure the Barcelona defensive unit it minimises the ball being in Arsenal’s danger zone and keeps it away from the players who can hurt The Gunners.

3) Be Ruthless – Barcelona have a reputation for being vulnerable at the back. This is somewhat misleading. Barcelona can lack concentration defensively and have a mediocre goalkeeper, but they let very few goals in. This is due to how well they keep possession – after all, you can’t score if you don’t have the ball. So while you may get chances against them, you wont get many, so you must convert any opportunities that come your way. Be merciless in the final third, as you can be sure Barcelona will do the same when they have their chances to score.

4) Exploit Set Pieces – Again linking to my previous point, one advantageous area for Arsenal is attacking free-kicks and corners. Barcelona are one of the few leading sides in Europe who are even less threatening in the air than the men from The Emirates. Last time these sides met it was from a set piece that Arsenal scored their goal. They have the men to do the same again.

5) Stop the dangerman at the source – Arsenal must not allow themselves to be mentally overawed by the wondrous talent of Leo Messi. The fact is that if he is given enough space and time in & around the penalty area, there’s not a great deal that can be done. The key man is not Messi but Xavi Hernandez. Xavi has been the premier centre midfielder in world football for at least 3 years. Messi may be the man to fire the bullets, but it’s Xavi who loads the rounds. Cut the supply line and a major portion of the Barca threat is nullified.

6) You can’t win the tie in the 1st leg, but you can lose it – Above everything else, it can’t be forgotten that this is only the first leg. The teams will do it all again in the fortress that is the Nou Camp next Tuesday. Arsenal must make sure that they are still in the match come then. Best case scenario – Arsenal win the first leg, ideally keeping a clean sheet. For my money, to be in with a realistic shout next week, Arsenal can afford no less than a 1-1 draw.


Don't forget to download 'The Greatest Events in Sporting History' Available at http://sportsevents.libsyn.com/.
Posted by Unknown at 15:24