The Ashes Review - What England Did Right 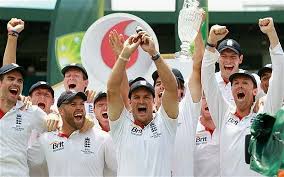 After years of disappointment and humiliation, England won an Ashes series in Australia for the first time in 24 years. Their 3-1 victory was a credit to the players and coaching staff, who all played their part in dominating the once mighty Australians and delighting those who stayed up at ungodly hours to watch and/or listen to the action. This has been one of English cricket's finest achievements, but what were the key factors that led to such a comprehensive success:

Knowing what a marathon year 2010 would be, captain Andrew Strauss took the decision to not play in England's trip to Bangladesh in the early part of the year. Strauss had to endure a great deal of criticism from members of the press saying that it devalued the captaincy and, "it wasn't like that in my day." It was telling that only Michael Vaughan (one of Strauss's recent predecessors) publicly supported the decision. Vaughan knows the strain that being England captain puts upon a person, and how it is a much different job than even ten years ago. Strauss knew that England could beat Bangladesh without him. The same could not be said for Australia. This was an example of astute delegation and prioritisation. Funny how in their retrospectives of this Ashes series, I'm yet to see a single member of the press corps admit that they might have got it wrong regarding Strauss taking a back seat in Bangladesh.

When Andrew Flintoff retired, England were left with a dilemma. Push Stuart Broad up the order to Number 7, and play five bowlers, or play a sixth specialist batsman and rely on four bowlers to take twenty wickets. Strauss and coach Andy Flower plumped for the latter. Flower believes that a five man attack always leads to one of the five being underbowled. Also, it helps that Graeme Swann not only has the ability to bowl for long periods, but he relishes the chance to do so. With Swann twirling away at one end, the seamers can be rotated at the other, preventing them from fatigue. While some still think England should go with five bowlers, this consistency of planning means that England always take to the field with a settled team and a settled game plan.

After taking a beating from Australia in Perth, Strauss and Flower were under pressure to make wholesale changes. The Australian players and press missed no opportunity to imply that England were mentally weak. However, Strauss and Flower have strong ideas on how they want England to play, and these remain the same regardless of the situation of the match, or the series. Some would call it stubbornness and this inflexibility may hurt England at some point in the future, but so far, it has proved a cornerstone of their success.

Fitness In The Field:

Some pundits bemoan the plethora of specialist coaches in the game these days, but it seems that this England team have a "fail to prepare, prepare to fail" mentality. In the past couple of years, England aren't just one of the fittest sides in the world, but also one of the best in the field. They constantly took brilliant catches, made crucial run-outs and saved runs with a voracious zeal. This all goes towards pressuring batsman into making mistakes. And this was never demonstrated more clearly than in Australia this winter.

These two only ever ended up together as England's captain and coach by happenstance. But every England cricket fan should be grateful for it. Together they exude an understated calm, as well as a disciplined work ethic, which seems to be bringing the best out of this group of players. Player schedules and tactics are planned with Teutonic precision. Nothing is left to chance and no expense is spared to ensure that the players are as well prepared as possible when they take to the field of play. However, thus far, they have managed to avoid any "paralysis by analysis". Strauss shrewdly pointed out that, "I wouldn't want to captain ten other players exactly like me". He understands the need for a healthy mix, so maverick personalities such as Kevin Pietersen & Graeme Swann easily slot in alongside more unassuming performers like Tim Bresnan & Jonathan Trott.

And unlike some of the divisive England camps of the past, it seems as if the whole squad all get on and enjoy each other's company and successes. In all walks of life a happy team is normally a successful one. And for the bulk of Strauss and Flower's time in charge, it's been nothing but success.


Don't forget to download 'The Greatest Events in Sporting History'. Available at http://sportsevents.libsyn.com/ or at www.simplysyndicated.com, e-mail us at sportshistoryshow@googlemail.com and you can follow us on Twitter @TGEISH
Posted by Shane at 14:30