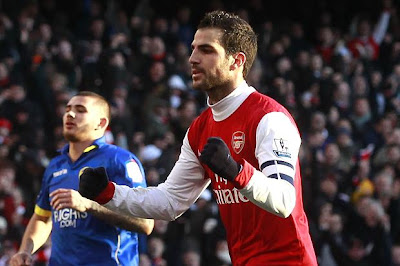 On a freezing Saturday afternoon, Arsenal staggered into the hat for the 4th Round of the FA Cup after scraping a draw with Leeds United in a nerve shredding affair at The Emirates. The Gunners failed to heed the lessons learnt by Manchester United at this stage of the competition last season, and were rescued from an embarrassing defeat by a combination of Cesc Fabregas and Theo Walcott being summoned from the bench in the second-half.


It was a curious day all round. On the tube journey to the stadium, I was stuck next to two Arsenal fans who seemed to be, shall we say... more than a little excitable. As for what possible substances that could have elicited such excitement, well, I couldn't possibly comment. Soon after, the first Leeds fans arrived on the tube as far south as Stockwell (The Emirates Stadium is in North London). By the time we reached Arsenal station there were as many Leeds fans as there were Gooners in the carriage. And just to make sure we were aware of their presence, they began a few chants of "Come on Leeds!" Knowing the reputation that Leeds supporters have had in the past, I exhaled with a degree of nervousness. This proved unfounded and unfair as their chanting was laced with a degree of irony and good humour. Fans of both sides engaged in conversation as we exited Arsenal station with one Leeds fan claiming that he was just here "for the experience". He then jocularly claimed to not know who Robin Van Persie was..

The Leeds support packed the Clock End of the stadium, bringing with them the biggest volume of away support in The Emirates short history. And they were happy to let everyone in the ground and the watching television audience know about it. They cheered throughout, turning the Clock End into a Yorkshire stronghold for the day. As they taunted the Arsenal fans with "Your support is f****** s***", the Gooners fired back with "Play here again? You'll never play here again!"

As expected, Arsenal rested many of their regular starting XI. Fabregas and Walcott were on the bench while Van Persie and Samir Nasri were given the afternoon off. However, this was a line-up that looked more than good enough to win against most Premier League opposition, let alone a side from the Championship. But talent only produces when it is allied with the right attitude. Maybe it was the swirling wind, maybe it was the early start, the ostensible weakness of the opposition or a combination of all three. But what was clear is that many of the Arsenal players assumed that they could roll over Leeds without breaking sweat. Passes constantly went awry, the tempo was stagnant, as was their movement off-the-ball. Leeds had shown against both Manchester United and Tottenham last season that they are a resilient team who won't gift you anything. If you want to beat them, then you have to do it on your own steam.

Bar one incisive pass from Tomas Rosicky that played Andrey Arshavin clear, Arsenal offered little. Arshavin's tame one-on-one finish summed up their play in the first-half. Sebastian Scqullaci also had a header cleared off the line, but a lead at the break waould have been more than Arsenal deserved.

And with a bit more belief, maybe Leeds could have had a half-time lead of their own. While their defending was admirable, they often resorted to playing fruitless long balls for the tireless Luciano Becchio to chase. It was like watching Manchester City from Wednesday night all over again, which is a pity as given the proud footballing tradition of Leeds, I expected them to be more progressive when on the ball. The only glimpse of quality was when the ever dangerous Robert Snodgrass proved whatever Rosicky could do, he could match by playing Becchio in on goal with a well weighted pass. Goalkeeper Wojech Szczesny (who had an immaculate game) denied the Italian as he rushed off his line and closed down the angle, making a good save.

Arsenal began the second-half playing at an increased tempo, but their passing remained lacklustre. Players constantly kept choosing to pass when they should dribble, dribble when they should pass, doing nothing when they should have been doing something. The primary culprit was Arshavin, who had the worst game I've ever seen him have in an Arsenal shirt. With every mistake he made, the louder the howls of frustration from the crowd got. The criticism from the stands grew ever more vitriolic, and I can only assume the reason Arsene Wenger didn't substitute him was because of the vicious reception he would have received from his own support when leaving the pitch. Whatever the reason, his confidence looks completely shot and he twice ran to the side of the pitch, assuming that he would be the player to be sacrificed for Walcott's arrival, and then Carlos Vela's.

Just as the game was beginning to drift into a soporific stupor, it was brought to life by a goal for Leeds. Snodgrass pulled Emmanuel Eboue out of position before playing the exciting but inconsistent Max Gradel into space on the left-hand side of the penalty area, Denilson overcommitted himself into the tackle and foolishly brought Gradel down. Referee Phil Dowd immediately pointed to the spot and Snodgrass fired the penalty home underneath Szczesny's wrist to send the away support into hysterics.

Arsenal looked dazed. Shell-shocked. They looked set to become the latest team to fall by the wayside to Leeds FA Cup exploits. A rescue job was required and Wenger knew it. Fabregas was summoned from the bench and with his first two touches injected more pace into Arsenal's play, resulting in a corner. His mentality spoke volumes and raised the spirits of the crowd and his players. It was like he was running around the pitch with a neon sign that said "Give me the ball!"

But it seemed that even Fabregas's efforts would come to naught. Even a superhero needs a sidekick and he was soon joined on the pitch by Walcott. Up to this point it looked as if Leeds would hold out to cause the shock of the 3rd Round. But Walcott's sheer pace put a crucial seed of doubt in the minds of their players. For the first time in the game, nerves seemed to affect them, their defence dropping ever deeper, worried about Walcott racing in behind them. As the game reached the 82nd minute, Arsenal resuscitated themselves.

Walcott was played clear on goal but opted to take the shot early rather than set himself first. It was a tame sidefooted effort and Kasper Schmeichel saved easily. Five minutes later, the England winger broke free into the inside-right channel. After escaping the attentions of Ben Parker, Alex Bruce made a desperate covering challenge. Walcott went down and the referee pointed to the spot.

Or did he? As celebrations engulfed the Arsenal fans, the referee seemed to change his mind. Bewilderment rung around the stadium and Leeds were given a free-kick as Walcott was adjudged to be offside. This was the incorrect decision but resulted in the right outcome as Walcott later admitted that he dived to try and con the offical into giving a penalty.

But he and Arsenal were not done. Walcott broke clear of Parker again. The Leeds defender tugged at Walcott's left arm, unbalancing him. This time a penalty was awarded and Parker - already on a yellow card - was lucky to remain on the pitch.

But that's by the by. The 90 minutes were now up, and Cesc Fabregas had a golden opportunity to keep Arsenal in the competition. It's fair to say that most neutrals would have wanted Leeds to hang on. The FA Cup is made for giant-killing stories such as this and the only thing that could have rounded it off would be for Schmeichel to keep the spot-kick out. But Fabregas isn't the type to go along with a pre-ordained narrative, not when he can write one of his own. He showed tremendous courage to place his shot down the middle of the net, gambling on Schmeichel diving to one of the corners of the goal.

But if the penalty was telling, his celebration was even more so. While he ran to the crowd and pumped his arms in delight and relief, hs teammates all turned their backs and walked back to the centre circle. It didn't seem an act of shunning, more an embarrased acknowledgement that once again they needed their lynchpin to save them from a quandary that they never should have got themselves into. While the other ten players looked sheepish, Fabregas stood a man apart, a class above, Arsenal's superman. The claim that Arsenal lack leadership was never shown for the falsehood that it is more succcintly as in that moment. Fabregas showed yet again that you don't have to be a 6" plus defender with blood dripping from your forehead to be an inspirational leader.

And the drama wasn't done there. As we approached injury time, Fabregas played Nicklas Bendtner clear with a sumptuous pass. Bendtner had already missed two great headed chances in the second-half, but he saved the worst for last, shinning the ball horribly wide of the goal. In scenes reminiscent of last Wednesday night, Denilson then hit a fierce effort from outside the box. As the ball left his boot, it looked for all the world like it was going to nestle in the far corner. But Schmeichel produced a top class save to keep the score at 1-1. Finally, in the dying seconds Walcott hit the side netting from a tight angle. The whistle went soon after and both sets of fans applauded their players at the end of a compelling FA Cup tie.

While Arsenal created enough chances in the last five minutes to win three games, a defeat for Leeds would have been harsh. They defended manfully, with Bruce and Andy O'Brien impressing. And while they offered a minimal attacking threat, Snodgrass looks Premier League quality and only a fine save from Szczesny stopped Becchio from making it 2-0 in the second-half. Their fans were also a credit to the club, raucous without being provocative, passionate without being abusive. Despite their funny chant, the Arsenal fans have got it wrong. Leeds will be back at the Emirates again.

As for Arsenal, they now face a replay that could be tough. Elland Road will be packed to the rafters and with a demanding fixture list on the way, Wenger faces a dilemma whether to give his fringe players a chance to make amends or risk tiring out his key men to gain a place in the 4th Round. But regardless of the team he picks, if they perform like this again, then Leeds are sure to beat them on Wednesday week.


Don't forget to download 'The Greatest Events in Sporting History'. Available at http://sportsevents.libsyn.com/ or at www.simplysyndicated.com, e-mail us at sportshistoryshow@googlemail.com and you can follow us on Twitter @TGEISH
Posted by Shane at 05:43