What's That Coming Over The Hill? - England's Next Test 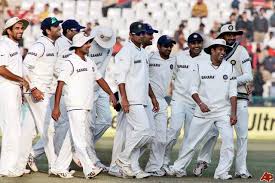 It seems that England are not allowing themselves to wallow in any form of self-congratulations after vanquishing Australia. And that's just as well. While winning an Ashes series in Oz is historic, it's no longer the game's pinnacle. Australia are not amongst the game's best sides any more. Right now, the world's best Test team are India. So it's apropos that the Indians visit these shores in the summer.


If England intend to reach the summit of the game, then they must get the better of India. Last time they faced each other back in 2007, an ill-tempered series ended with India getting their first series win on English soil for 26 years. They have since kicked on to sit on top of the world's Test rankings.

England will need to follow the Indians example, and must perform with as much focus as they did against Australia. It should be a fascinating series as England have a depth in their bowling attack that should mean that any problems taking twenty wickets are now a thing of the past. In fact, I would give England's bowling the edge over their Indian counterparts.

However, India have a fearsome batting line-up. While England still have a worrying propensity to collapse, India have strength all the way through their top seven. The recent batting exploits of Harbhajan Singh has only thickened up their rearguard even further.

Both sides like to apply pressure through big scores and then rely on their seamers to rotate around a top class off-spinner. Whoever gets the play their game the most will probably come out on top, not to mention how important the coin toss will be for each Test, so luck may also be a factor. What is certain is that a mouth-watering encounter awaits us. For England, the hard work has only just begun.


Don't forget to download 'The Greatest Events in Sporting History'. Available at http://sportsevents.libsyn.com/ or at www.simplysyndicated.com, e-mail us at sportshistoryshow@googlemail.com and you can follow us on Twitter @TGEISH
Posted by Unknown at 14:08