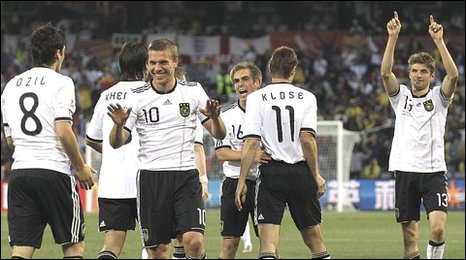 England's best player, making two good saves to keep the contest going longer than it should have done. Commanded his box well but should have done better with Muller's first goal. But he can leave the pitch with his head held high.

Carried his nervy performance against Slovenia into this game. Froze when in possession in the Germany half. Was occasionally reckless in the tackle and picked up a yellow card late on.

Held the England backline together on Wednesday. But mobility has never been Terry's strong point and he was often on the back foot. Carelessly pushed up in the second-half when England were looking for an equaliser. This was Terry's ego getting the better of him. It left the defence exposed and turned a 2-1 scoreline into a 4-1 humiliation.

His match-winning block against the Slovenes meant that Fabio Capello kept him in the team at Jamie Carragher's expense. It turned out to be a catastrophic decision. Upson was primarily at fault for Germany's first and looked short of the quality needed to play at the World Cup. His goal was a mere footnote.

Was short of his best without looking out of place. Had a job keeping tabs on Muller, Ozil and Lahm and did better than most but still struggled on occasion. Failed to make any inroads going forward as Lahm kept him quiet.

Put a couple of useful crosses in but did little else. Milner looked swamped by the enormity of the occasion and should have been substituted earlier than he was.

Was unlucky not to score after being denied by Neuer, the bar and a myopic linesman. But Lampard's passing was short of his expected standard and even his ability to pressure his opposite number in midfield was absent.

Barry is not a natural holding midfield player and there has always been a worry about how how would cope against strong opposition. His failings were clear to see here. His poor touch made him culpable for Germany's killer third goal and was run a merry dance by Ozil for their fourth. Their coach Joachim Low shrewdly identified him as England's best passer and Germany allowed him no time on the ball as a result.

His worst game of the tournament. His passing and shooting were below par. Gerrard demonstrated why managers are reluctant to play him in central midfield. His positional indiscipline did him and his team no favours. He often ran around like a moth in a room full of light bulbs. I only gave him a rating of 5 due to his assist.

Often dropped off in search of the ball. This negated his danger and his passing was nowhere near good enough to hurt Germany. To be honest, I could have copied one of the ratings I gave Rooney earlier in the tournament and pasted it into this one.

Defoe is a goal poacher who was inexplicably used as a target man in the first-half. He got no service in the game, which makes him redundant as an on-pitch presence. Worked hard, but all perspiration and no inspiration.

Solid but came into no man's land for England's goal. Made a good save from Lampard but a potential weak point in the German side.

Defended well against Ashley Cole but was unusually sloppy on the ball. It seemed that the collision of two of the world's premier full-backs led to them cancelling each other out.

Wasn't tested as much as he could have been but made a superb late tackle to deny Defoe.

England's over-reliance on the long ball was meat and drink to Mertesacker. Will be tested more in the quarter-final, but was immaculate in Bloemfontein.

Did a solid job on James Milner, closing him down to prevent the Aston Villa man getting dangerous crosses in. Did little going forward but that's not why he's in the team.

Neat and tidy on the ball. Didn't get forward as much as he did in previous matches but never needed to push himself. Will have to raise his game next Saturday.

Has been so good in South Africa that Germany have barely missed Michael Ballack. Schweinsteiger was brilliant, using the space given to him to run the show and pass the ball around England. Man of the match.

With the exception of Schweinsteger, Muller was the game's star performer. His touch and mobility were a constant threat to Cole and Upson. Took his two goals with real aplomb.

Buzzed around intelligently without ever really catching fire. He's fast becoming a star of the tournament though, and made Barry look pretty foolish for Germany's fourth goal.

Was peripheral at times, but maybe his well taken goal will help him regain the confidence that took a hit after missing a penalty against Serbia. He tracked back diligently and helped Boateng out whenever was necessary.

A continual menace with a true killer instinct. Klose made life miserable for Terry and Upson and could have scored more than the one that he did.


Don't forget to download 'The Greatest Events in Sporting History' Available at http://sportsevents.libsyn.com/, e-mail us at sportshistoryshow@googlemail.com and you can follow us on Twitter @TGEISH.
Posted by Unknown at 18:45