Festival Of Togetherness Converts The Atheists 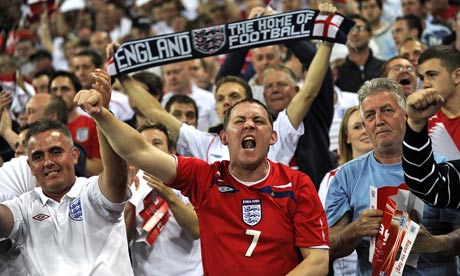 When you next get a chance, have a look around you. It's not easy to forget that the World Cup's on, is it? Sitting in my office at work the other day, I couldn't believe how much football paraphernalia (especially regarding England) adorned the walls. And if you don't work in an office it makes little difference. Wallcharts and flags on the windows of houses, those same flags on the outsides of cars annoying certain podcasters. And talking of annoying, you can even buy vuvuzelas in supermarkets (I must state that I'm a fan of the vuvuzela, but it'd be remiss of me to ignore the majority. But how I'd love that majority to be silenced if the vuvuzela could make it over to Britain during the next Premier League season).
And as I looked around my office - which is symptomatic of most of the country - and stared at the orgy of World Cup signifiers around me, the realisation struck. The World Cup is a lot like Christmas.

Hands up all those who celebrate Christmas - you know, the turkey, the presents, the whole shebang. Ok, now keep your hands up if you believe in Jesus. And I don't mean the way that Judaism believes in him, or if you know a Hispanic person whose name is pronounced "Hey-Seuss". I mean the Messiah, Passion of the Christ, forgotten member of the Bee-Gees Jesus.

Thought so (by the way, the one person with their hand still up can put it down now). Well, as long as England are involved, a similar thing can be seen here. Those who don't watch football much or even don't like it seem to be taking part in the festivities. Try and deny it if you want, but my Twitter feed begs to differ.

The tournament has even had an effect on those who steadfastly remain World Cup 'grinches'. No? Once again my twitter feed begs to differ. So what is it that makes the World Cup the primary story in the country right now?

Well, of course, the sense of national pride is a major factor. And the World Cup is the most hyped sporting event on the planet. But I think it's more than that. Like at Christmas, a large part of the appeal is the togetherness that ensues from the competition. Barbecues are held, specific appointments are made to go to the pub to watch the games, people get out of work early. I wonder how many "we're going to (insert name of pub or friend's house) to watch the game, you coming" conversations have been held since June 11th?

While many will revel in the festival of football, a lot of these meetings are an excuse for people to catch up. As already stated, a lot of those watching the games won't be fans. They spend the bulk of their time discussing how things are at work, at home, or where they plan to go for their holidays.

You don't have to be a Christian to get something out of Christmas, and you don't have to be a follower of football to get something from the World Cup. I think it's a pity that it's solely dependent on England's involvement in the competition. And when they get knocked out, it's the equivalent of the arguments that happen at Christmas sometime in between the Queen's speech and Doctor Who. Frustration and anger ensue, and we swear, "I'm never going through this crap again!" Until next time.

So while any sensible person knows that football is not the Messiah, just a bunch of very naughty boys, for a short period of time, we believe. We believe blindly. We believe that something that a lot of us don't really understand is going to make it all alright. Sounds a lot like orthodox religion to me.


Don't forget to download 'The Greatest Events in Sporting History' Available at http://sportsevents.libsyn.com/, e-mail us at sportshistoryshow@googlemail.com and you can follow us on Twitter @TGEISH.
Posted by Unknown at 23:00