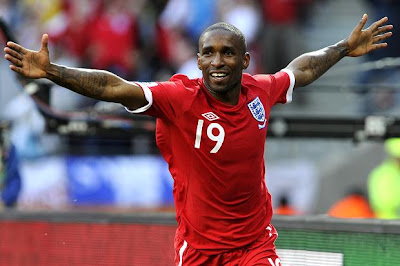 Has been a calm and reassuring presence to England's rearguard since returning against Algeria. Was unflappable yesterday. Which only exacerbates the feeling of what might have been if he had of played against the USA.

Looked to be suffering with the pressure of the occasion more than most, especially in the early stages where he seemed unable to pass straight. This had a detrimental effect on his forward play and England will need his attacking thrusts against Germany. But made a crucial intervention late on and is yet to be the defensive liabilty that some (me included) had predicted.

As excellent as he is unlikeable. Cole has been England's best player at this World Cup and was again a plus point for his team. Never second best defensively and got to attack more than in England's two earlier games. Will be a key man on Sunday.

Man of the match. We saw the benefits that his huge ego and sense of entitlement bring to England yesterday. Was obdurate, focused and driven. Unlucky not to score in the second half and held England together superbly when put under late Slovenian pressure.

Another to fluff his lines early on. But as the game progressed Upson kept things simple and produced a block in the dying moments that was worth as much as a goal. Chances are he'll return to the bench, so he should feel proud with his World Cup contribution.

After setting up England's goal he looked like a man who had just figured out the Pythagoras theorem after years of failing to understand it. The assist was a eureka moment for Milner. He then produced a pretty good impression of David Beckham in his prime after that. When England's intensity dropped Milner's industry was crucial to England holding on for the win.

I'm not sure what Gerrard has to do to make the BBC pundits admit that they were mistaken in claiming that he cannot operate effectively for England on the left hand side. In England's best momeents, Gerrard was superb. His raking passes and forward runs were a menace to the Slovenian defence. This was probably his best performance for England in a major championship. More of the same please Steven.

Gave Rooney a gorgeous pass in the second half that he should have scored from, and looked more eager to get forward from midfield than previously. But he blotted his copybook by missing a sitter and needs to improve against Germany. He is too important to England for the team to carry him.

Had an excellent first half, and his ability to start attacks are crucial to the rhythm of the side. But he's not a natural holding midfield player and looked vulnerable when put under pressure. This also affected his distribution. He'll need to be wary of the dangerous Mesut Ozil in the next match.

Is this the start of the revival? Rooney looked more dangerous as the game went on, but his anxiety to make a sizeable impact for England is proving counter-productive. Also took a knock on that weak ankle of his. If he's not fully-fit, I think Capello should bite the bullet and leave him on the bench against Germany.

Just as Emile Heskey was never in the team for his goal threat, Defoe wasn't picked for his link-up play. He is a predator, pure and simple. He only made 4 successful passes against Slovenia but was in the right place to score the winner. He may not be the right man to start against Germany, but he would be very unlucky to be dropped after this performance.


Don't forget to download 'The Greatest Events in Sporting History' Available at http://sportsevents.libsyn.com/, e-mail us at sportshistoryshow@googlemail.com and you can follow us on Twitter @TGEISH.
Posted by Unknown at 04:39