With the final Grand Slam of the year now over, here's a brief review of the two people who tasted victory at Flushing Meadows: As mentioned in my last blog post, Kim Clijsters retained her US Open crown with a straight sets annihilation of Vera Zvonareva. In what was possibly the greatest sporting story of 2009, Clijsters returned to the game after retiring to start a family, in which time she had given birth to her daughter, Jada. She was only given a spot in last year's US Open as a wildcard. Unseeded, and having only had two tournaments to shake off two years of ring rust, she shocked and thrilled the tennis world to become the first wildcard entrant to win the US Open in the competition's 129 year history. The story was made even more memorable by little Jada (who was 1 at the time) tottering onto the Arthur Ashe court to celebrate with her mother. In the light of this achievement, Clijsters was dubbed, "Supermum" and "Momma Kim" by the press. And on the whole, these monikers were more affectionate than patronising. Even though combining motherhood with sporting success is rare, it's irrelevant as far as sporting competition goes. But after being away from the game for so long, with little practice and having an unprotected route to the trophy, the fact she still beat the best the women's game had to offer was incredible. Her new found motherhood simply added a nice layer of warmth to the story.

But Clijsters is back amongst the major players of the women's game, and is now expected to be in the latter stages of tournaments. And she provided an impressive sequel to last year's blockbuster success in America.

Normally in a sequel, the hero/heroine has to face an enemy more deadly and dangerous that anything they've faced before. But Clijsters decided to write her own script. After getting the better of Venus Williams in a tense semi-final, she tore Zvonareva apart. Winning in under an hour, 'Supermum' had plenty of energy left to celebrate on court with her daughter again. Little Jada must be thinking that these yearly trips to New York are quite straightforward: "Stay in nice hotel, Mummy hits those fuzzy yellow balls for two weeks, and then we get to take a shiny trophy home". 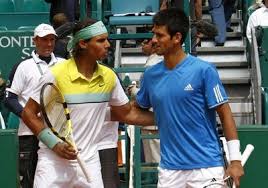 IRON MAN and THE JOKER:

Rafael Nadal and Novak Djokovic took part in an enthralling men's final a few hours ago with Nadal coming out on top, 6-4, 5-7, 6-4, 6-2. At one set all, it was anyone's match. But 'Iron Man' turned up the pressure and broke Djokovic's will in the third set, producing tennis that was as good as I've ever seen. There were rallies in that match that were breathtaking in their brilliance.

And don't think this was another example of Djokovic's temperament failing him again. He has been nicknamed 'The Djoker' for his sense of fun on court and his impressions of his peers. Here's an example of this from last year's US Open - http://www.youtube.com/watch?v=N8gbgse0WsY. But the Serb has truly grown up in the past fortnight. He showed his resolve by saving two match points to defeat Roger Federer in the semi-final. And as well as he performed in the final, Nadal refused to be beaten. Playing against the Spaniard is like carrying a heavy load without knowing when you can let it go. It's tough enough exhorting your aching limbs to keep going without having to do the same to your competitive will. Rafa ratcheted up the pressure until it seemed that there was no end in sight to the torment. He put Andy Murray on the torture rack at Wimbledon earlier in the year. At Flushing Meadows, it was Djokovic's turn.

And now Nadal has taken his place amongst the greats. Victory at the US Open makes him only the seventh man in history to win all four of the sport's most coveted prizes. But it's not just the garlands that he's earned, but the manner of their acquisition that has left the sport awestruck. Yesterday, Rafa played a match close to perfection, and now the unquestionable has to now be questioned. Can Roger Federer still be called the greatest man ever to swing a racket? I think yes, but for the first time, 'Iron Man' has planted a seed of doubt in my mind. And if he continues on his current charge, that seed may continue to grow.

Don't forget to download 'The Greatest Events in Sporting History'. Available at http://sportsevents.libsyn.com/ or at www.simplysyndicated.com, e-mail us at sportshistoryshow@googlemail.com and you can follow us on Twitter @TGEISH
Posted by Shane at 03:05