A Game too Far? 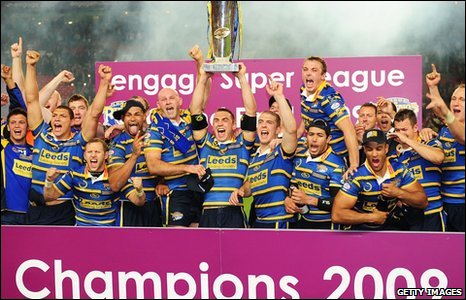 Tonight St. Helens booked a place in their 5th straight Grand Final, a remarkable achievement until you realise they lost the last 3 to Leeds and the one they won was against Hull in one of the worst seasons in Super League history.


Tomorrow their opponents will be one of Wigan or Leeds, who just 2 weeks ago played out one of the best play off games ever seen as Leeds snatched a 1 point win at Wigan in a game that went right down to the wire, with Wigan's Pat Richards' missing a controversial last second penalty that would have won them the match.
The result is that we are just 80 mins away from the 4th straight Leeds St Helens however for me this seems to be a game too far for the Rhinos for the following reasons:

1) We are without 2 of our best players in Peacock and McGuire, both of who face a lengthly spell on the side lines that could stretch into next season. More on McGuire 's injury later but Peacock is a huge miss, as he is really the man who can change the momentum of a whole match in Leeds favour.

2) Wigan are the best team this year, you don't finish top of the league by accident and they can hurt you given half the chance.

3) Leeds have played nowhere near their best for the whole season with the odd exception. With injuries taken their toll and the team just not really clicking.

However there are reasons to be hopeful.

A) With the exception of the cup final, Leeds have turned it on in every game that mattered so far, Wigan in the Cup, Wigan in the playoffs and St Helens in the Semi Final. Ok they messed up in the most important game of the season so far but here is the chance to put that right and prove that we are the best in the land.

B) Wigan have lost nearly every game that mattered so far. At Leeds in the cup, at home to Warrington where a win would seal them top spot a whole 2 weeks earlier than they got it, at home to Huddersfield when a win would have got them the same thing and then against us in the playoffs. They certainly have the talent but do they have the balls?

C) Siege mentality. It's us against the world, everybody seems to be on Wigan's side after Mcguire pulled back a Wigan support runner in his own half to deny them a "certain" try according to some (Stevo and Phil Clarke).

D) Which brings me nicely to point D, Do it for Danny! McGuire suffered a horrible injury in the dieing seconds, in doing so he brought down a Wigan player, cue the most horrible bile you have heard from any supporters ever. Wigan fans were wishing career ending injuries on the lad, broken necks, legs and all sorts. Then to top it off Phil Clarke, whose own career was ended by a broken neck, wrote an article for Sky Sports claiming the rugby gods had seen justice done to Danny, in a truly horrible and vile article by a so called professional journalist, when he should have been pouring water on the flames instead he added petrol.

That brings me to my final point, give us a performance to be proud of Leeds, even if we don't make it, do it for Danny, do it for Peacock, Burgess, do it for the players who are leaving after the season. Do it for Leeds and for your fans. Finally remember the playoffs are our time and this is at our house. Leave Wigan knowing they have been in a game, make them work for it. Is it a game too far? possibly but then again I thought that in 2008 Grand Final and look what happened there.


Don't forget to download 'The Greatest Events in Sporting History'. Available at http://sportsevents.libsyn.com/ or at www.simplysyndicated.com, e-mail us at sportshistoryshow@googlemail.com and you can follow us on Twitter @TGEISH
Posted by Shane at 00:42