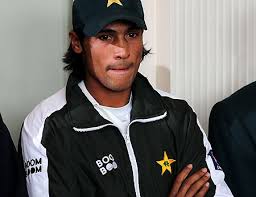 Wunderkind. An addition to language to which we all owe a debt of thanks to Germany. And don't we love a wonderkid when one comes along. Watch the joy elicited from a parent when their young child learns how to string words together or walk unaided. The arrival of a special young sporting talent has a similar effect on those who love sport.


On the 25th August, Pakistan fast-bowler Mohammed Amir brought the England batting line-up to their knees with a display of bowling that is as good as any seen in my lifetime. He took six wickets in the innings and became the youngest man to acquire a place on the famed honours board at Lord's. Three days later, he was implicated in the 'spot-fixing' scandal that has currently put the world of cricket in a spin, and has put the sport firmly at the forefront of British and Pakistani news - both print & television. (As a quick aside, the floods in Pakistan haven't even come close to getting such coverage. It makes one wonder, in the eyes of the media how many human deaths are equal to nefarious behaviour in what is essentially a game?)

For those who aren't in the know, here's a quick lowdown. In an undercover sting operation the News Of The World (does that newspaper ever spend their resources on anything else) secretly filmed Mazhar Majeed, a man claiming to represent several of the Pakistan side, saying that he could arrange for Amir and his fellow seam bowler, Mohammed Asif to bowl no-balls (illegitimate deliveries) at specific moments in the match for betting purposes. Majeed boasted that “there’s big money to be made” and that events at Lord’s would be proof of the strong influence he has over the Pakistan team. He predicted that at certain moments in the match, Asif & Amir would bowl no-balls and sure enough, it happened just as Majeed said it would. While it was unlikely that it affected the final result of the match (England ended up winning comfortably), the fact that certain incidences of the Test were fixed have caused understandable outrage.

The fallout from this continues, but one of the primary subplots is that of Amir, and this is where my focus lies. Amir’s bowling on that first morning seemed to rubber stamp the arrival of a new sporting superstar. He arrived on these shores as an up-and-comer as Pakistan took on Australia earlier in the summer. By the time he lined up against England at Lord’s he could arguably lay claim to being the best bowler in the world on current form.

What makes this all so incredible is that Amir is only 18 years old. Think of that, an age where the body and mind still has a lot of growing to do, stepping into the arena of Test match cricket and not only holding your own, but shining brighter that all of the other competing 21 players.

And while it’s ludicrous and distasteful for this story to bump the flooding in Pakistan down the running order of news channels, it’s important to understand the relevance of cricket in Pakistan. We are talking about a nation that is in constant political turmoil, which houses a worrying amount of people who’s only mission in life is to cause chaos, military rule is again looking a serious possibility and economic disparity only causes to exacerbate things. Indeed the fact that Pakistan’s president is nicknamed, “Mr 10%” sums up the sorry state of affairs.

So cricket is not only a welcome diversion for the Pakistani public, it’s one of the few aspects of society that unites them to the rest of the world. Sport will never solve thorny political issues but it would be churlish to ignore the symbolism. How many Pakistan youngsters looked at Amir’s exploits and will seek to emulate them? And while it shouldn’t be necessary, any time an Asian person attains success in their field, it strikes another blow for integrated tolerance and to those bigots who regard those from the Middle East with immediate distrust (you may think I’m exaggerating but I think the reaction to the British boxer Amir Khan winning a silver medal in the 2004 Olympics proves otherwise).

While sympathy surrounding the scandal has been in short supply, the only crumbs of compassion have been directed towards Amir. Many see him as a symptom rather than a cause of the corruption in Pakistani cricket that may turn out to be endemic. There is a general consensus that Amir has been at best coerced, and at worst ordered to go along with the scam by the team’s more experienced members. While this is all conjecture, it is true that a large part of Pakistani culture is about being deferent to your superiors and always showing respect for your elders. Whether this resulted in Amir deliberately bowling a no-ball remains to be seen, but as anyone who has seen the News Of The World's tape will tell you, the evidence against Amir, Asif & Pakistan captain Salman Butt is damning.

But what piques my interest here is that Amir is not the first. At least as far as wonderkids go. While they may not all be targeted by a venal agent, looking to make a fast buck, many burst on to the scene in a variety of sports only to lose their way as soon as the world seems to be their oyster.

In 1996, Allen Iverson arrived at the Philadelphia 76ers, with the expectation of bringing the ‘city of brotherly love’ their first NBA championship since the era of the great Julius Erving. Iverson, whose moniker was “The Answer” was tipped to become an all-time great. But despite coming close in 2001, Iverson began to believe his own hype, constantly missing team practices. He felt himself untouchable, better than his team-mates, and drowning in his own hubris was traded to the Denver Nuggets. Iverson has since returned to Philadelphia, but it seems that he missed his window and is destined to end his career ‘ringless’.

In tennis, Jennifer Capriati is another example of the dangers of being branded a wunderkind. Reaching the semi-finals of the French Open at only 14 and winning an Olympic Gold Medal at 16, she played a style of tennis that is amongst the most influential the game has seen. Don’t believe me? You think Kim Clijsters and the Williams sisters were the first to try and knock the cover off the ball? They and many more on the women’s game walk in the footprints trod by Capriati. And while the Floridian did manage to attain three Grand Slam titles, many think that she underachieved. She understandably found the attention that her exploits as a teenager garnered difficult to deal with, and has arrests to her name for shoplifting and marijuana possession. Only two months ago, she was rushed to hospital after an overdose on prescription medication. She thankfully survived, and her family are adamant that this was not a suicide attempt. Regardless, Capriati is yet to officially retire, and I wonder if she’s struggling to reconcile her life away from what she has known for all her adult years, as well as some of her adolescent ones.

Sometimes it’s not greed, arrogance or personal demons that afflict those who show potential in their tender years. Often the wonderkid can be halted by a more basic failing of building on their early promise. Realising that you’re not quite as good as everyone said you would be can be a tough thing to deal with. One only has to look at the travails of Sergio Garcia or Wayne Rooney to see this in effect.

And while it’s disheartening for sports fans to see someone fail to realise their full potential, are we also partly to blame for this? In the opening monologue of ‘Jeery Maguire’, Tom Cruise narrates the following line, “Until they go professional, they’re just like popcorn in a pan. Some pop. Some don’t”. Well it’s all well and good having such a thoughtless attitude in a movie, but lest we forget we’re talking about the lives of real people, with all their individual characteristics and quirks. While sport can provide us with stories to match the greatest fiction, it does not give us license to look upon its participants the way we would of make-believe characters.

It’s a truism that many sports stars are quite immature and emotionally stunted. I imagine I would be too if I was extremely well paid to essentially play for a living - one would have no reason to grow up. And the top level of sport is an ideal stage for them to show off, the way children would in a school play. But as all who’ve attended school plays will tell you, there’s often one child who gets overawed by it all, the lights and numerous pairs of eyes focused towards them becoming too much to handle. But I’ll bet you never bawled them out, or said they were a disgrace.

Being great at what you do is a tough gig, even more so when you’re yet to discover yourself as a person. There are examples of people who made it out the other side unscathed. But the likes of Bjorn Borg and Pele are exceptions. And when it comes to the ‘Corrupted Wonderkids’ club, are we are partly responsible for it having so many members?


Don't forget to download 'The Greatest Events in Sporting History'. Available at http://sportsevents.libsyn.com/ or at www.simplysyndicated.com, e-mail us at sportshistoryshow@googlemail.com and you can follow us on Twitter @TGEISH
Posted by Unknown at 23:55